Roaches Roam Restaurant in Texas, My Cleaning Products Suggests a Roach Spray to Kill Them Fast and Safe

Health inspectors found roaches in a Texas restaurant, said a report. To kill them effectively and safely, MCP recommended the use of the pesticide-exempt Roach Blly. 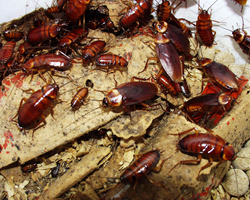 ...Roach Bully is the best roach spray as it doesn't further threaten anyone's health. That's because it is organic-based, hence, it leaves no harmful chemicals when sprayed...

Cockroaches were sighted at a restaurant in Texas. Because of it and other violations, its license was put under suspension, said a report from kbtx.com. In connection with it, My Cleaning Products recommended a roach spray to help anyone with a problem with those critters kill them fast and safe.

According to the report dated April 30, 2014, the roaches were found alive during an inspection on Monday. Particularly, they were sighted in the kitchen area of the restaurant, it detailed.

Following that, the post shared that the establishment, which is at Bryan Avenue, was then ordered to shut down by Brazos County Health Department. Nonetheless, after paying a fine of $500 and a re-inspection on Tuesday, it relayed that it was allowed to open again.

Among the other violations, inspectors noted during the first inspection at the restaurant include storage of food items at improper temperatures. It related that they specified the shelving of the establishment must also be repaired or replaced.

"Live cockroaches were sighted in one food establishment in Bryan, Texas. As a result, it was ordered to shut down earlier this week."

"The crawlies were found in the kitchen area of the restaurant. And that, along with other violations, prompted the Brazos County Health Department to give the business 65 points following the inspection on Monday and to suspend its license."

The bacteria and germs that they carry around are the things that make cockroaches some of the most gross pests. My Cleaning Products said that they could get them from anywhere and spread them everywhere.

Those elements, it stated, could cause numerous diseases. Because of that, it advised the public to maintain a clean indoor environment in order to discourage the presence of the crawlies. And in case they get past the preventive measure, it asserted that it is imperative to kill roaches fast. That way, they could be stopped from multiplying and causing more problems, it added.

However, to be able to eliminate those critters immediately, MCP cited that one would need the help of a roach spray. But out of the many in the market today, it only recommended Roach Bully.

The company asserted that Roach Bully is the best roach spray as it doesn't further threaten anyone's health. That's because it is organic-based, hence, it leaves no harmful chemicals when sprayed, it explained. As it shared, EPA has even added it on its FIFRA 25(b) list for being pesticide-exempt.

Moreover, MCP assured that it is effective. It stated that it could kill the cockroaches, even their young and eggs, in just seconds.

Anyone who wants to personally see how well it works, MCP shared, could get a Roach Bully Complimentary Sample at mycleaningproducts.com.