New City Stage Company is presenting the world premiere of the play "Roseburg", a new play that highlights the pros and cons of gun control. The show runs July 7 -31, 2016 at the Adrienne Theatre in Philadelphia in conjunction with the Democratic National Convention. 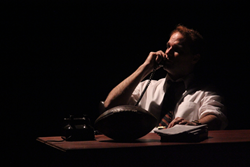 Russ Widdall in the November 2013 revival of "RFK" in Philadelphia.

"Russ Widdall's portrayal of Robert F. Kennedy, a man trying to honestly change the world for the better is convincing and, of course, tragic without an awareness of its tragedy. " -- The Washington Post

New City Stage Company is pleased to announce the featured production of our 2015-16 Season, the world premiere of ROSEBURG, conceived, written, and directed by award-winning theatre artist Ginger Dayle along with the Voices for a New City Ensemble. This play parallels a gun control speech given by Senator Robert F. Kennedy in 1968 and the tragic Umpqua community college shooting in 2015, events that both happened in Roseburg, Oregon.

Ginger Dayle (writer of the hit play "Hinckley") and New City Stage’s educational ensemble have crafted a melding of eras and attitudes that bring a progressive hero and a conservative conundrum into the withering focus of a nation gone numb. Featuring Russ Widdall, from the award-winning production of "RFK," reprising the role of Bobby Kennedy.

ABOUT THE SHOW:
On May 27, 1968, Presidential Candidate Robert F. Kennedy gave a speech on gun control on the steps of the courthouse in Roseburg, Oregon. He was heckled and went on to lose the Democratic primary in that state… Less than 2 weeks later his life would be cut short by an assassin’s bullet.

ROSEBURG examines the simmering synapses between the gun control argument of the Vietnam era and its stepchild; the modern Twitterverse, that holds any and every conflict under the microscope of bipartisan disdain and infotainment ennui. Why are we still arguing about this and when will the killings cease?

The project was conceived by Ginger Dayle, who directed New City Stage’s Philadelphia premiere of "RFK" in 2012, a sold-out hit which then premiered in Washington, D.C. at the Studio Theatre and then returned to Philadelphia to another sold-out run. Ms. Dayle won the 2013 Broadway World Award (Philadelphia region) for Best New Work for directing "RFK," which was her directorial debut. Ms. Dayle then went on to pen "Hinckley," a play about the assassination attempt on president Ronald Reagan by John Hinckley Jr. The show received much acclaim and earned her a critic's pick in Philadelphia. "ROSEBURG" is her second original play.

Televsion and film actor Russ Widdall starred as Bobby Kennedy in the hit one-man show "RFK" and has always had a passion for politics and theatre, and is reprising this role for ROSEBURG. He was on two seasons of HBO's "The Wire" and featured in the film "My One and Only" alongside Renee Zellweger. He recently wrapped up shooting for the independent film "Wetlands," directed by Emanuele Della Valle, to be released this winter.