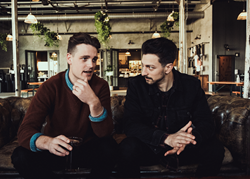 The Routefusion GraphQL API lets us move twice as fast as the legacy API and enables us to iterate on and deliver customer features without compromising time to market, security, or scalability.

Routefusion, a financial technology company focused on providing the easiest and fastest way for tech companies to embed cross-border payments in their applications, announced that it has completed the overhaul of its platform, building a brand new API in GraphQL.

GraphQL is a query language and server-side runtime that prioritizes giving clients exactly the data they request and no more. GraphQL was originally built by Facebook in 2015 as a way to improve the speed and efficiency in which data is requested from their backend services. Since then it has become one of the most widely adopted technologies for startups and Fortune 500 tech companies.

Compared to traditional REST APIs, GraphQL allows engineers to work smarter and faster, ultimately creating better experiences for developers and end-users. The decision to focus on the data contract layer of the business wasn’t an easy one as the company already has customers that were processing millions of dollars in payments each day. However, Routefusion's leadership knew the rebuild was necessary for the future of the company.

“As an engineer I knew that if we didn’t make the change, we weren’t going to be able to deliver an experience that would scale over the long term,” explained Colton Seal, Routefusion’s CEO and co-founder. “We have a very aggressive product roadmap. Without this major architectural change to our tech stack we risked scalability concerns and we risked providing a lackluster experience for developers all over the world that are building applications using our cross-border and international banking APIs.”

“We couldn’t have done this massive change without the hard work of our amazing team. There were many late nights and long hours. Not to mention, we built the brand new backend while also supporting all of our existing customers in the current environment,” shared Seal.

Since completing the rewrite, Routefusion has transitioned all of its existing customers into the new system. And the hard work is already paying off. The team has quickly seen improvements and benefits, including a reduction in customer integration times of four weeks and a decrease in support requests.

“The Routefusion GraphQL API lets us move twice as fast as the legacy API and enables us to iterate on and deliver customer features without compromising time to market, security, or scalability,” shared Jason Minsker, COO at Novel Financial, a neobank that provides an all in one banking solution for small businesses.

Additionally, Seal says that “developers from RouteFusion’s customer base, as well as our internal team, are much happier and less stressed.”

About Routefusion
Routefusion's API enables neobanks, payroll providers, platforms, and marketplaces to begin embedding cross-border payments to their customers in days, not months.