Royal Flush Havanese shares information on interpreting a dog’s body language in order to ultimately foster a better relationship between dog and owner. 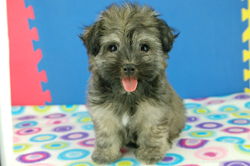 What is my body language telling you?

Understanding what a canine is trying to communicate is often the key to solving dog behavioral issues, and can help strengthen the bond between owner and pet.

Humans often try to communicate to their dogs using familiar gestures and emotions. However, dogs descend from wolves, and they have their own methods of communication using body language that humans often misunderstand and misinterpret. It is important to be able to read the body language of a dog so as to better understand him/her. Just like people, all dogs have their own unique personalities, with their own fears and preferences. Understanding what a canine is trying to communicate is often the key to solving dog behavioral issues, and can help strengthen the bond between owner and pet. Royal Flush Havanese shares with readers how to connect with canines using the language of dogs.

One of the most important things an owner can know about their dog is whether or not he/she has a more submissive or more dominant personality. Although this may change from interaction with dog to dog, knowing how one’s canine will most likely react upon seeing an unfamiliar dog will allow an owner to be better prepared when the situation arises. This can also apply to meetings with unfamiliar humans. Most people are aware that dogs have a pack mentality. A submissive dog is showing another that he/she will not challenge the other, and that he/she poses no threat. A dominant dog, on the other hand, will challenge another canine– trying to assert his/her superiority and show confidence around others. Signs of a submissive dog include tail wagging while holding the tail low, and cowering. However, the dog will still have its head held up high, with the muzzle pointing towards the other dog. Sometimes this is accompanied with licking of the other dog’s face. A sign of complete submissiveness is shown when a dog lies down on their back, showing their stomach and genitalia. Some dogs will urinate as well, which is known simply as submissive urination. Dominant dogs, on the other hand, will stand as tall as possible with weight applied evenly to all four paws. The tail will also be held up high, possibly wagging slightly. Ears will be forward; eyes will be staring directly at the other dog, but with the mouth closed enough so teeth are not showing.

A display of dominance can sometimes be mistaken for aggressiveness, and vice versa. An aggressive dog, unlike a dominant one, will have all weight on the front legs, waiting to jump into action. From there, there are two different types of aggression that can be displayed– fear aggression and offensive aggression. Signs of fearful aggression include growling, crouching low to the ground, narrowed eyes, flattened ears, and a tucked tail. This type of fear typically is displayed when a dog sees no way to escape an undesirable situation. Conversely, an offensively aggressive dog will look very much like a dominant dog, but will also expose their teeth, wrinkle their muzzle, and will bark, growl and snarl loudly.

These are only the basic behaviors displayed by dogs. However, all canines have a wide array of emotions and responses depending upon the situation, and the dog itself. Dogs that are curious and something but also insecure will have their weight on their back legs, ready to run away, yet will stretch out a paw or the neck towards the unknown object. Dogs that are on alert stand upright, with weight evenly distributed, ears fully erect, mouth closed, and will let out an occasional bark or whine. A happy, relaxed dog will typically not show many body language cues, and will hold his tail, weight distribution, ears, and mouth in a relaxed manner, and may gently wag his tail.

Dogs that are unsure of something will demonstrate what is known as displacement behaviors. These are normal behaviors, but exhibited at a time where the dog is suppressing an urge, and include yawning, scratching of the body, biting parts of his/her body, shaking (like a wet dog), and licking the lips.

Lastly, an anxious dog that wants to remove itself from a particular setting will show avoidance behavior. These include turning the head away, hiding, and other signs of submissive behavior. Dogs acting in this manner should be allowed to leave the place that is causing their anxiety to go somewhere where they feel safe.

Royal Flush Havanese encourages readers to strengthen their bond with a canine in their life by practicing reading that canine’s body language. Royal Flush Havanese is a BBB accredited business specializing in breeding and raising Havanese puppies born and raised in Rhode Island and Florida. Royal Flush Havanese has been awarded a Certificate of No Complaints from the BBB and a company rating of A+ for outstanding dedication to honesty in the business place, customer satisfaction, and for ethical policies and procedures. Please join Royal Flush Havanese in their quest to teach others about the loyal, gentle and lovable Havanese breed. Like us on Facebook and check out our website,where you can find even more helpful articles and informative tips for dog-enthusiasts and breeders alike.