Sabai Technology, leading provider of consumer VPN Routers, has announced the launch of an open source project called JaiRo. The company recently launched a website dedicated to the community and development of JaiRo. 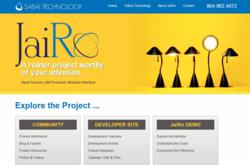 Developers and fans of the project alike are invited to visit JaiRoProject.com, which hosts a community for the project that includes forums, blogs, photos, videos, and product information.

Sabai Technology has big plans for home and small business networks. JaiRo, the company’s latest project, is an open sourcing routing platform in the early stages of development. While the company gears up for an upcoming Kickstarter project to help fund development, it has created a website to host the project.

Developers and fans of the project alike are invited to visit JaiRoProject.com, which hosts a community for the project that includes forums, blogs, photos, videos, and product information. Developers interested in the open source code or creating modules will find a home at the projects redmine, which features a wiki, documentation, a project calendar, and a feature and bug tracking system.

Visitors to the site will also be able to experience an interactive demo of the JaiRo interface. The idea behind the product is to consolidate and unify advanced networking projects that are currently only obtainable by hobbyists willing to create one-of solutions. Because home and small business networks are so severely limited by the industry standard routers, many of these project require a separate home server.

An excellent example of one such networking project is a VOIP phone server, which has become increasingly popular in recent years. While there are a few off-the-shelf products for so-called average users, they require independent hardware. With a JaiRo powered router, the VOIP phone server can run directly from the router, and be installed at the core of the network. This eliminates unnecessary hardware as well as making things like remote access straightforward.

Sabai Technology is a young tech company located in Simpsonville, South Carolina. The company has a reputation for great customer service and their advances in consumer VPN Routers. Often billed as the easiest to use and most powerful VPN Router firmware, Sabai OS is the company’s current flagship product. In 2012, Sabai Technology introduced the VPN Accelerator, which was it’s first foray into an x86 powered device.