San Diego Comic-Con to Feature Stars and Producers of Groundbreaking Documentary “I Know That Voice” in Q&A Panel; Offers Sneak Peak Leading Up to Its Winter 2013 Release

The star-studded cast and crew of “I Know That Voice,” a new documentary that ‘puts a face to the voices we all know and love,’ will meet at San Diego Comic-Con to divulge exclusive details about the film; fans offered access to Insider VIP List, DVD pre-orders and Cartoon Voice Imitation Contest. 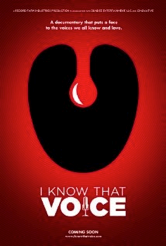 I Know That Voice

This documentary not only features the voices behind some of the world’s most beloved cartoons, but it also draws back the curtains into the lives of the unsung heroes whose voices have captivated millions of people’s hearts

The 2013 San Diego Comic-Con convention announced the star cast and crew of the revolutionary new documentary “I Know That Voice” will host a panel for more than 175,000-plus comic book fans from around the world on July 18, 2013. John DiMaggio (“I Know That Voice” Executive Producer and voices of Bender from Futurama, Jake the Dog from Adventure Time, IFC’s Out There and many more) brings together the documentary’s cast, producer and director to expose an exclusive sneak peak at the most anticipated film about voice over ever made at The World’s Biggest Comic Book Convention™.

From comic book junkies and animation maniacs to video game gurus and anyone who has ever been touched by cartoons, rumor of this film’s release has left fans filled with anticipation. Growing at a steady pace, more than 2,100 fans have joined the VIP Insider List and pre-ordered the DVD. With YouTube videos garnering 800,000-plus views and hundreds of Cartoon Voice Imitation Contest submissions pouring onto the documentary’s Facebook page, this film is gearing up to reveal to the world the mysterious lives and humor of some of the greatest voice actors of all time.

To add to fans’ growing excitement, every 100th person to join the VIP List on the documentary’s website will be announced and will win a limited collector-edition poster autographed by John DiMaggio. Not only will VIP List members get the latest news on the film, but they will also have first dibs to pre-order the DVD and get their hands on a copy before it hits the market.

“We’ve been absolutely bombarded with fans’ anticipation on social media since word slipped out,” said John DiMaggio. “San Diego Comic-Con is the perfect place to raise the bar and be accessible to the fans so they can ask us anything and everything they are dying to know about the project, the voice acting industry and more.”

Producer Tommy Reid said “I Know That Voice” will break new ground and give cartoon lovers of all ages and places a light-hearted, in-depth look into an industry that other films have only scratched the surface. “This documentary not only features the voices behind some of the world’s most beloved cartoons, but it also draws back the curtains into the lives of the unsung heroes whose voices have captivated millions of people’s hearts.”

About the “I Know That Voice” Team

John Di Maggio, Tommy Reid and Lawrence Shapiro’s combined chemistry and strengths came together to form the groundbreaking “I Know That Voice” documentary. Stated by Tommy as “a true labor of love,” the film took two years to make, collected extensive interviews and compiled never-before-seen footage making “I Know That Voice” truly one-of-a-kind of its subject matter. Emmy-nominated and Annie award winner John Di Maggio is known for his iconic role as “Bender” in Futurama and “Jake the Dog” in Adventure Time, as well as his roles in The Penguins of Madagascar, Gears of War, Kim Possible and more. Tommy Reid is a renowned producer of films including Kill The Irishman, Americans, Superthief: Inside America’s Biggest Bank Score, Danny Greene: The Rise & Fall of the Irishman and Strike. “I Know That Voice” Director Lawrence Shapiro directed films including Jam in the Dam, Los Lobos, Kiko Live, The Marshall Tucker Band: Carolina Dreams Tour and Blue Cheer: Rocks Europe.