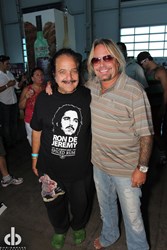 Not to be outdone Ron Jeremy assisted Executive Chef Scott Wagner with a rum inspired creation and brought the house down. The Sunday Chef Shakedown’s first place goes to Executive Chef Charles from Roy’s of La Jolla. A strong team has been put into place for the 2014 San Diego Spirits Festival culinary component including Chefs David Chenelle, Jess Ledsman, Scotty Wagner and Peter Edwards. A big thank you must go out to Shamrock Foods, Newport Meats and Open Blue

Top bartenders went head to head for the final Cocktail Wars as contenders were challenged to create a cocktail in front of the judges, the final four had a secret ingredient Fire Eater Hot Cinnamon Whiskey. The final round was close, with only points between the Winner Cervantes Magana and Mike Yen, which was followed closely by Daniel Palacios and Chris Burkett. Master Distiller Johnny Schuler joined the judge’s panel.

The San Diego International Spirits Competition was held in conjunction with the San Diego Spirits Festival. A highly-qualified panel of spirits judges from throughout California evaluated the entries using a proprietary scoring system that evaluated each spirit on a number of factors, including taste, appearance, aroma and commercial suitability. With one Double Gold, eight Gold medals, 26 Silver and 10 Bronze, the judges at the competition awarded these distinguished medals to the best of the best. Results will be announced in a separate release.

New Brands that Debuted at The San Diego Spirits Festival: Failte Innovations/Failte Vodka was extremely excited to be taking part in the San Diego Spirits Festival. Although a last minute entry they knew they had to be part of what festival brings to the industry. Other brands launching at the festival included Dulce Dorado Tequila and Manzanita Distilling with both their moonshine and vodka.

Fodor's named the San Diego Spirits Festival one of the Best Cocktail Festivals in America and US Traveler ranked it second on the list of worldwide can’t-miss festivals.