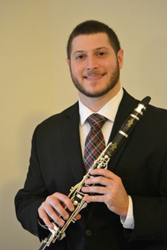 Mr. Tepper is a nationally accomplished solo concert artist who has appeared with the Philadelphia Orchestra under the direction of Charles Dutoit.

Sandy Tepper announced today that he will make his New York debut at Weill Recital Hall at Carnegie Hall on Sunday, October 27, 2013 at 2:00 p.m.

Mr. Tepper is a nationally accomplished solo concert artist who has appeared with the Philadelphia Orchestra under the direction of Charles Dutoit. He will present his debut at the world-famous Weill Recital Hall at Carnegie Hall by performing works composed by some of the most iconic contemporary artists.

The following is the program for Mr. Tepper’s debut:

Ms. Hickman studied in the Honors Program at the Mannes College of Music Preparatory Division, and holds a Bachelor's and Master's degrees in piano performance from the Manhattan School of Music. She has performed as a soloist and chamber musician in the United States and in Europe, at such venues as the International Music Festival at Taos, the Kaufman Music Center, Dimenna Center for Classical Music, and The Nicholas Roerich Museum.

A graduate of both the Pre-College and College of The Juilliard School, Ms. Mueller is a member of the cello/piano duo CROSS ISLAND, Artist-in-Residence at Old Westbury Gardens (Long Island, New York), and a frequent performer on the Composer’s Voice concert series, which presents new music by living composers. In 2013, she released her first solo CD, Solitaire, featuring a number of premieres, several written especially for her.

“It’s an honor to present this night of music on a stage that epitomizes the finest the thriving New York landscape has to offer,” Mr. Tepper said. “I’m very proud to stand alongside these incredible musicians and join the ranks of those that have had the privilege to play on this stage.”

For additional information, go to: http://www.carnegiehall.org/Calendar/2013/10/27/0200/PM/Sandy-Tepper-Clarinet-with-Guests/.

About Sandy Tepper
Sandy Tepper is a Long Island clarinetist who received his Bachelor of Music in Music Performance from the Crane School of Music at SUNY Potsdam, and his Master of Music from the Moores School of Music at the University of Houston. During the summer 2008 season, Mr. Tepper performed with the Philadelphia Orchestra at the Saratoga Performing Arts Center under the direction of Maestro Charles Dutoit. He is currently a guest artist in conjunction with the Cross Island Duo.