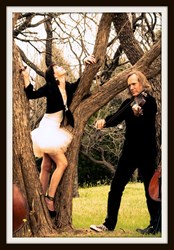 There are few who can lay claim to being well versed in such a range of instruments as the pedal steel guitar, fiddle, dobro, mandolin and guitar Milo Deering is one of those few. Milo began playing when he was eight years old. His parents, both self taught musicians, gave him lessons on piano, ukulele and harmonica. He played guitar in various local bands throughout his junior and high school years. Following graduation he began a study of classical guitar under Robert Guthrie at Southern Methodist University. Milo taught privately for fifteen years while learning to also play pedal steel guitar, fiddle and mandolin.

Together, Heather and Milo and produced five CD's, and have just released a beautiful new love song, "Love Takes Time", about the meaning of true love which debuted on live television last month on Fox 4 "Good Day Dallas". Heather's songs have been played on the BBC in the UK and her CD's have been chosen as "Critic Pick's" on CDBaby.com.

This talented duo are performing in concert Saturday, November 9th in Winnsboro, Texas at Crossroads Music Company, a listening venue with a cool vibe and notably good reputation with locals. People travel from long distances to come to this venue because there they are able to experience the musicians close up and personal in an intimate, low key setting. Winnsboro is a quirky art town with Bed and Breakfasts, shops and many great restaurants!

Opening for Heather McCready is "Love and Grace", a gospel duo with a twist of country and blues from the vocals of Lindsey Gail and Gus Gustafson. Doors open at 7:30. Seating assignments are determined by time stamp, with reserved seating assignments processed first. Remaining available seats will be filled by general admission tickets, and will also be assigned seating in the back half of the room. In the event of a sell-out, a portion of the advanced general admission seats become standing room only. No tickets will be mailed unless special arrangements are made by telephone. The seating chart will be available at the front desk the night of the concert.

Heather's songs are available on her website HeatherMcCready.com, CDBaby.com/heathermccready, iTunes.

The video featured here is "You Came to Me" by Heather McCready. The song is available on her "Give it a Day" album or by single download.

Heather had a packed house glued to their seats at the coveted Singer/Songwriter's Listening Room, Uncle Calvin's Coffeehouse In Dallas, Texas.Heather has a knack for effortlessly digging in deep and reaching the soul of listeners.

"Christmas, the Way I Hear It"Produced by Milo Deering and Heather McCready