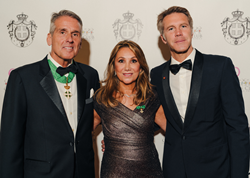 "The American Foundation of Savoy Orders continues the centuries-old traditions of the Dynastic Orders of the Royal House of Savoy by supporting families in need, especially during these challenging and unprecedented times,"

On Saturday evening, April 9, 2022, the 4th Notte di Savoia Los Angeles, the annual spring charity royal gala hosted by the American Foundation of Savoy Orders, was held at the Jonathan Club in downtown Los Angeles. More than 170 patrons gathered at the black-tie gala in support of the foundation's philanthropic mission — Chivalry for Children's Causes — for the event’s primary beneficiary, Caterina’s Club, a Southern California-based nonprofit that provides 5,000 warm pasta meals to homeless and low-income children daily.

The American Foundation of Savoy Orders was delighted to welcome back His Royal Highness the Hereditary Crown Prince of Italy, Emanuele Filiberto of Savoy, Prince of Venice and Prince of Piedmont, as a guest of honor for this occasion. His remarks were the highlight of the evening, as he praised the achievements of the foundation in carrying on its mission to support chivalry for children’s causes.

“I am thrilled to see the American Foundation of Savoy Orders continue my family’s centuries-old tradition of supporting families in need, especially during these challenging and unprecedented times,” said Prince Emanuele Filiberto.

“The American Foundation of Savoy Orders’ fourth annual charity gala was a tremendous success, providing Caterina’s Club with funding for thousands of warm meals for children across Southern California. We are proud to support Caterina’s Club, which has donated more than 7 million meals to homeless and low-income children since its founding in 2003,” stated Event Chairman Commander Daniel J. McClory.

“Our American Foundation of Savoy Orders has truly been blessed with incredible members of our American Delegation and its Foundation, and through their efforts with the Notte di Savoia, they have reflected the very charitable work upon which our Savoy Orders have been based. Whether we head from East to West or North to South, our members are joining forces in responding to societal needs, and Caterina’s Club is such. We applaud all, especially Chef Bruno Serato and Dan and Florentina McClory for their good will and spirited work in making the Notte the success that occurred on April 9,” concluded Carl Morelli, Esq. and Joseph Sciame, respectively the Chairman and President of the American Foundation of Savoy Orders.

ABOUT THE AMERICAN FOUNDATION AND THE AMERICAN DELEGATION OF SAVOY ORDERS
Headquartered in New York City, the American Delegation of Savoy Orders, which includes all 50 of the United States of America, is among the 35 delegations of the Savoy Orders located throughout Europe, the Americas and Japan.

ABOUT THE ROYAL HOUSE OF SAVOY
The Dynastic Orders of the Royal House of Savoy are among the oldest orders of Knighthood and Merit in the world. The Savoy Orders are headquartered in Geneva, Switzerland and have 35 Delegations worldwide that support the Orders’ ongoing charitable works. Their origins and their principles, traditions and humanitarian goals date back a thousand years. HRH Prince Victor Emmanuel of Savoy, Prince of Naples and Duke of Savoy, is Head of the House of Savoy and Grand Master of the Savoy Orders. Prince Emmanuel Philibert is his son and the hereditary crown Prince of Italy and currently serves as President of the Council of the Savoy Orders.
In 1946, when the Kingdom of Italy came to an end, the House of Savoy was Europe’s oldest reigning dynasty. The heads of the House of Savoy had ruled, first as counts, then as dukes and finally as kings, for almost a thousand years. Descended in the direct male line from a tenth-century vassal of the Holy Roman Emperor, the Savoys ruled the Alpine state of Aosta, as well as Savoy, where they established their capital at Chambery. Their dominion was eventually extended to include Piedmont and other territories in what are now Italy, France and Switzerland. By the eighteenth century, the Savoys were kings of Sicily and then Sardinia, and it was under their aegis that the Italian states were united by 1871.

The Royal Family’s heritage can be seen in castles and palaces, and in the beauty of the northwestern Italian city of Turin, the Savoys' magnificent capital in the heart of Piedmont in the 16th into the 19th centuries. The dynastic chivalric traditions of the Royal House of Savoy continue. The Order of the Annunciation and the Order of Saints Maurice and Lazarus, two of the world's oldest knightly institutions, are still alive today, epitomizing the dynasty's medieval spirit while supporting very modern charitable works in Italy, Switzerland, France, Japan, the United States and elsewhere. Chivalry lives. Today, the House of Savoy remains one of the oldest royal dynasties.
For more information on supporting the causes of the American Foundation of Savoy Orders, see below.
CONTACT:
Larissa Van Duser, Executive Director, American Foundation of Savoy Orders
amsavoy@aol.com, +1 212 972 0495
For more information, visit https://www.savoia.org/