The pry-bar and bolt-cutter resistant bike carrier allows for flexibility and security with two, three and four bike options 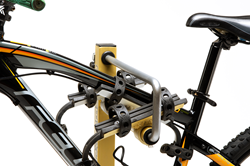 The average thief is looking for the easy target that can be accessed with an ordinary inexpensive bolt cutter. The SCS Magnum is a secure bike carrier that offers no 'soft points' and keeps bikes from looking like an easy target.

The world’s first truly anti-theft bike carrier, SCS Magnum, is currently crowdfunding on Indiegogo in hopes of raising $90,000 for production of the bike rack. Magnum is a hitch-mounted, two, three, or four-bike carrier designed for car, SUV, truck or RV use.

The basis of SCS Magnum is a carrier that is simple to use, strong, fully adjustable to a variety of frame geometries, and most of all, completely secure. The carrier protects against bike theft with a solid steel integrated security bar that is bolt-cutter resistant and pry-bar proof. Instead of fumbling with cable- or chain-locking security systems, one simple movement locks all bikes onto the carrier. The one-piece, hingeless structure also eliminates any other possible avenues for would-be thieves. Additionally, the locking bar stows inside the aluminum support arm when not needed.

Creator Neil Johnson was inspired to invent SCS Magnum five years ago after his third bike was stolen from the back of his car, despite using a cable and lock to secure it.

“A majority of bike thieves utilize bolt cutters which are fast and silent,” Neil Johnson, SCS Magnum creator said. “There is a very small percentage of professional thieves that can deploy a myriad of techniques which can defeat any system, but the vast majority of bike thefts come out of opportunity, and the average thief is looking for the easy target that can be accessed with an ordinary inexpensive bolt cutter. The SCS Magnum is a secure bike carrier that offers no 'soft points' and keeps bikes from looking like an easy target.”

Though rugged and secure, the SCS Magnum also allows complete flexibility. The 19- pound all aluminum carrier with adjustable frame trays allows for all bike types, including mountain bikes, carbon road bikes, and cruisers. Eventually a second attachment will be added to the SCS Magnum carrier which will allow skis and snowboards to be securely transported.

An anti-sway feature utilizes a seat-tube stabilizer, which prevents swinging or slippage and eliminates any need for readjustment once bikes are strapped down. SCS Magnum’s frame trays also allow the unique ability to vary the space between the bikes. Every bike can be aligned independently, keeping each one horizontal to the ground.

Magnum will be crowdfunding on Indiegogo until January 8, 2015. Bike carriers start at $300 and range up to $385 for a four-bike carrier. For more information about Magnum, visit http://bit.ly/MagnumIndie.

SCS Racks was founded by Washington native Neil Johnson. Combining traditional common sense with state of the art metal fabrication, the original and highly successful prototype model was named the “BoneLocker”. The BoneLocker was the first product built by SCS and became the blueprint for the advanced SCS Magnum. All SCS carriers are built with local craftsmanship and unmatched quality locally in Spokane, Washington. The company’s philosophy is quality over profit, and every product is guaranteed against manufacturer defects for one year. Learn more at http://www.scsrack.com/.