Key West Seaplanes®-Little Palm Charter Service celebrates the start of another winter season while ushering in winter-weary travelers for a tropical getaway. Key West Seaplanes® announces that their growing fleet continues to accommodate VIPs to Little Palm Island from locations such as Miami, Ft. Lauderdale, Naples and beyond. 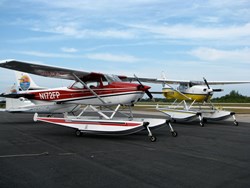 Key West Seaplanes® Little Palm Charter Service celebrates the start of another winter season while ushering in winter-weary travelers for a tropical getaway. Key West Seaplanes® announces that their growing fleet continues to accommodate VIPs to Little Palm Island from locations such as Miami, Ft. Lauderdale, Naples and beyond.

Key West Seaplanes® is based in Key West and was formed in 2009. The company is owned and operated by long term Key West residents, Julie Ann Floyd and Nikali Pontecorvo. Key West Seaplanes® offers private seaplanes to Little Palm Island, Hawks Cay, Cheeca Lodge, Ocean Reef Club, Fisher Island and all points along the keys chain. Pilot Julie Ann Floyd reminds all, "Much of Key West Seaplanes® business stems from people simply wishing to escape city life in Miami and the rest of the mainland....and of course, we also have many people that fly down from up north. So they connect with one of our flights from their choice of any airport on the mainland and head straight for The Keys or seaplanes to The Bahamas." Key West Seaplanes® aircrafts are amphibious so they are capable of landing on water as well as on land. Floyd adds, "This makes our seaplanes very versatile. You can start at Miami International or another airport and head for your tropical getaway.....landing on the water!"

Ms. Franker entices the reader with an opening statement, "What if I told you of a way to completely forget the crowds and the hassle of the airport, ditch the traffic and the honking horns, and just float away to a secluded island getaway with that special someone? Your romantic island escape via seaplane awaits you! You’ve never really experienced the Florida Keys until you’ve seen them from a Cessna 206. Its an exhilarating experience, completely different from trekking along U.S. 1 in bumper-to-bumper traffic. My husband and I recently went for a ride and it was, in a word, breathtaking."

Key West Seaplanes® offers local aerial sightseeing flights of Key West, flights over The Seven Mile Bridge as well as Island Hopping via seaplane. Franker shares again, "Cruising along at about 500 feet above the water gives you a unique vantage point from which to view sea life in the crystal blue waters below: dolphin, tarpon, rays, hammerheads and maybe even a manatee if you’re lucky. From my perch in the co-pilot’s chair, Nikali pointed out a giant sea turtle below. Nikali and Julie make excellent tour guides from the sky, pointing out islands like Woman Key and Man Key in the island chain. They know the waters of the Florida Keys National Marine Sanctuary better than anyone I’ve ever met."

Key West Seaplanes® is based in Key West, Florida. The company has been featured in a multitude of aviation and travel magazines including Aviation Digest, FLYING Magazine, Pilot Getaways, Florida Travel and Life, Island Magazine, American Express' Departures Magazine and Water Flying Magazine. The premier seaplane charter company has also been featured on The Travel Channel in an episode of Flip Flip in which a couple is whisked away from Miami to Islamorada via seaplane to visit The Postcard Inn. Key West Seaplanes® routinely flies VIPs for the exclusive Little Palm Island and services other island resorts such as Hawks Cay, Ocean Reef, Fisher Island, and eclectic restaurants such as The Lorelei.Key West Seaplanes® to The Bahamas is another popular service known in the region.