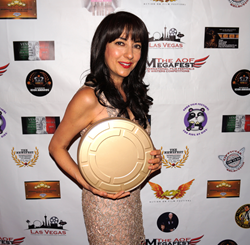 I hope that, through my films, I am providing some valuable insight into neglected minorities’ lives, and look forward to assessing the potential anti-bias impact of these movies on their viewers thanks to my research team’s experiments currently in progress.

In the past 3 years, CSUN Psychology Professor Dr. Luciana Lagana created, directed, and produced 2 social impact feature documentaries on homelessness, entitled OFF THE STREETS FOR GOOD and OLDER, LGBTQ, AND HOMELESS. Both films have fared well on the film festival circuit; they are currently being used as anti-bias experimental manipulations in randomized controlled research at CSUN.

OFF THE STREETS FOR GOOD, which is Dr. Lagana’s first feature documentary on overcoming homelessness, was completed in 2018. Synopsis: In this documentary feature film, several previously homeless people recall their hard journey towards having a home again. Mistreatment was rampant and we hear about the difficulties living on the streets directly from a former prostitute who lost her eye when she was shot and a professor who was put on the streets by her parents for coming out as a lesbian. We also learn about the struggles with homelessness from a classy middle-aged man, who now helps the homeless, and about the problems faced by a young gay black man who almost died living on the streets in the stranglehold of drug addiction but now thrives helping the homeless as part of his job. The directors of two nonprofit organizations share with the viewers the pleasure that they receive by helping homeless individuals overcome their challenges.

OLDER, LGBTQ, AND HOMELESS, Dr. Lagana’s latest anti-bias feature documentary, was completed this year. Synopsis: This social impact documentary features ethnically diverse and resilient transgender older adults who are currently living in transitional housing. It exposes many compelling challenges faced by this highly mistreated group. It becomes clear that we cannot possibly know what it’s like to feel like a woman without having the finger dexterity to shave, thus still looking very much like a man; to be LGBTQ older adults who are homeless and in need of selling everything that they own to stay alive; or to lose one’s job because, at an older age, some people have finally acquired the strength to come out as transgender, but their bosses do not accept them for who they really are.

In these 2 social impact films, brave individuals have shared their stories, providing raw and moving testimonials that have touched many audience members at film festivals. As a caring psychologist who has assessed and treated hundreds of clinical patients, Dr. Lagana strives to make sure that her interviewees feel accepted and respected in her presence (they reportedly preferred looking at her while on camera). Perhaps this safe atmosphere is reflected in the content of her movies. For instance, at a 2019 film festival that recognized Dr. Lagana’s latest film as the Best Feature Film, film reviews included “an eye opener” and “an incredible film that speaks for those who are silenced.”

“A film director who had watched my first film on homelessness at the Megafest last year told me at this year’s event that he considers my movies to be ‘very hardcore.’ His comment and prior reviews of my latest film suggest that the degree of authenticity of my films’ stars could be shocking to some viewers, as my interviewees did not hold back when it came to describing their formidable struggles on camera. It was a great honor to film these resilient individuals, in an effort to help clarify what it’s like to deal with overwhelming multiple stigma experiences. The research literature on minority stress contains several accounts of these experiences; it’s very common for individuals with intersectional identities to be judged negatively. I hope that, through my films, I am providing some valuable insight into neglected minorities’ lives, and look forward to assessing the potential anti-bias impact of these movies on their viewers thanks to my research team’s experiments currently in progress,” concluded Dr. Luciana.

Dr. Luciana Lagana has multiple doctoral and post-doctoral degrees and specializations in experimental and clinical psychology. For about 20 years, she has been an established full-time CSUN professor of Psychology, Women's Health, Gerontology, and Sexuality. She enthusiastically teaches classes and mentors many undergraduate and graduate students from several CSUN departments. Moreover, since 2002, she has been conducting NIH-funded research on ethnically diverse, mainly low-income older women's physical, psychological, social, and sexual health. Dr. Lagana has accumulated 45 peer-reviewed publications and has delivered over 100 conference presentations. She won the 2017 CSUN Exceptional Creative Accomplishments Faculty Award for her anti-bias feature films and shows, as well as the 2011 Preeminent Scholarly Publications Faculty Award and the 2008 Visionary Community Service Learning Faculty Award. Concerning her artistic pursuits, she was a child performer (singing, dancing, acting, and modeling) and was part of a touring theatrical company in her late teens in Italy. She also studied acting, hosting, and filmmaking in Los Angeles where, after studying film production in 2013 under the mentorship of Prof. Nate Thomas (the Director of the Film Production Option in the CSUN Department of Cinema and Television Arts), she started creating, directing, and producing several social impact films and series. She is an actor/host/screenwriter/director/producer with over 30 film festivals' wins listed on IMDb and more than 50 IMDb credits for hosting or acting in films, TV shows, and web series.