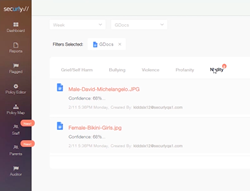 "This feature is an important new milestone in our AI based technology as it covers nudity inside images for the first time, and addresses a huge source of anxiety for the school districts."

In 2017, Securly developed AI technology with the capability of scanning text on student Gmail accounts for signs of self-harm, bullying, violence, and depression. This meant that every time a student sent an email to a friend about feeling sad, depressed, or wanting to hurt themselves, or received a threatening email from a bully, Auditor flagged the message and sent an alert to the school district. Auditor’s ability to scan emails for this content immediately resonated with schools, and within the first quarter of launch, the free Auditor tool brought in the same number of customers as Securly’s paid filtering solutions had cumulatively gathered over many years.

Within 6 months, Securly also launched 24, an emergency response service that utilizes expertly-trained human analysts to flag imminent cases of students in danger and escalate them to schools for immediate action. After experiencing the impact of Securly’s 24 team, schools began to request monitoring and scanning capabilities for Google Docs, Google Drive, and Gmail image attachments. Students would often write and share suicide notes through Google Docs. Google Drive and Gmail attachments provide a medium for online sexual predators and cyberbullies to share explicit and traumatizing images with students, some potentially involving other students.

Securly will be rolling out their nudity detection scanning feature to school districts to combat these dangers to online student safety. Each time a lewd or pornographic image is uploaded onto Google Drive or attached to a Gmail message, the file will be flagged and admins will be alerted. Districts will be able to adjust the sensitivity of the detection to their individual requirements, and a confidence score will be displayed when an image is flagged.

Neeraj Thakar, Vice President of Engineering, comments, “Securly’s mission has continued to comprehensively solve the problem of K-12 online student safety for schools and parents. We have been systematically covering as many vectors as we can identify where kids can get in harm’s way - both in schools and on their personal devices at home. This feature is an important new milestone in our AI-based technology as it covers nudity inside images for the first time, and addresses a huge source of anxiety for school districts.”

For more information on the upcoming feature, please reach out to sales(at)securly(dot)com.

Securly is a Silicon Valley-based student safety company that provides Edtech safety solutions. The only company to cater exclusively to K-12, student safety has been Securly’s mission since the very beginning. Currently, over 7M students use Securly’s free and paid filtering solutions worldwide, and thousands of districts use Auditor, Securly’s AI-based tool for cyberbullying and self-harm detection on Gmail. In addition to Filter and Auditor, Securly has expanded its product suite to include 24, Tipline, Hub by Securly, and many more.