Come listen to this quintessential Grammy-nominated Bluegrass group who will serenade you with over 40 years of bluegrass acumen on November 2 at 8 pm at the Gordon Center for Performing Arts. 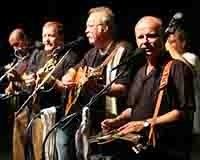 Who would have thought that 40 years after its inception, Bluegrass would reach a second peak in popularity in the early 1970s, and the progressive bluegrass style played by The Scene was particularly popular. Original Seldom Scene mandolin player John Duffey's stratospheric tenor anchored the group, but the vocal blend of The Scene set a new standard that attracted new audiences to what had been niche music. Their weekly shows included bluegrass versions of country music, rock, and even classical pop. The band's popularity soon required them to play more than once a week—but they continued to maintain their image as being seldom seen, and on several of their early album covers were photographed with the stage lights on only their feet, or with their backs to the camera.

The Seldom Scene has performed at the White House many times and continues to tour the world, known as "America's Bluegrass Band." Founded in Bethesda in 1971, the “Scene” has become one of the largest contributors to the progression of bluegrass from Flatt and Scruggs and Bill Monroe to the contemporary sound the band has developed today.

One of the founding members, banjo player Ben Eldridge, recently turned 75! He has been with Scene since its inception in 1971 when jam sessions in his basement became the foundation for the band’s existence. Eldridge still performs with the same fire and enthusiasm that characterized the band's early days as an advanced Bluegrass group that took its music beyond traditional Bluegrass style as demonstrated by Dudley Connell, whose renditions of traditional songs like "Old Train," folk ballads such as "Blue Diamond Mine," and blues songs like "Rollin' and Tumblin.’” Connell, who plays a masterful guitar and provides powerful lead vocals for The Scene has a reputation for challenging the bounds of Bluegrass.

Fred Travers is a former member of the Gary Ferguson and the Paul Adkins Bands. He is one of the most respected dobro players on the bluegrass circuit today. He is also an accomplished vocalist who contributes solid leads and harmonies to Ronnie Simpkins bass vocals. Not only does Simpkins sing bass but he plays up-right bass for the group. Simpkins has been performing Bluegrass music since childhood and is a former member of The Tony Rice Unit. Lou Reid, who plays mandolin for The Scene and provides tenor vocals, is also a former member of Ricky Skaggs Band, Quicksilver, and he currently fronts his own group, Carolina. On lead, or when providing harmony, Reid's vocals are the epitome of the powerful, "high, lonesome" tenor that is the signature of Bluegrass music.

The Seldom Scene continues to excel on the Bluegrass scene and has received critical acclaim for their work. Their latest CD, Scenechronized, recorded in 2007, was nominated for a Grammy award.