Cigar Advisor Publishes Article On How To Select A Cigar Lighter

Cigar Advisor Magazine is a digital publication dedicated to providing cigar enthusiasts with entertaining and informative content. Their January 2014 issue features a piece called "Cigar Knowledge: Selecting A Lighter" that details the wide variety of cigar lighters and when each one can be used most effectively. 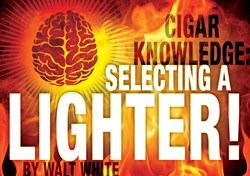 Cigar torches have grown in stature, and are now available from a single-flame pocket-sized torch to quint-flame desktop torches, which have five flames and larger tanks to fuel them.

The all-new Cigar Advisor Magazine is an online cigar magazine that brings a fresh, irreverent, and down-to-earth perspective on all things cigars to thousands of smokers. In addition to educational cigar content and behind-the-scenes cigar industry articles from some of the business’s top names, Cigar Advisor delivers an array of content about a variety of topics of interest to people who enjoy the cigar lifestyle. The magazine also features cigar reviews and ratings submitted by real smokers, and much more. Cigar Advisor Magazine has just released a new article. Written by cigar blogger and Cigar Advisor Magazine contributor Walt White, the article is entitled, "Cigar Knowledge: Selecting a Lighter." The article was published as a guide to the various sizes and configurations of butane cigar torch lighters available on the market today, and the considerations for selecting the appropriate torch.

White specifically discusses lighters within the context of ever-larger ring gauges, the industry-wide system of measuring a cigar's diameter in 64ths of an inch. According to White, the cigar industry has seen a large growth of 60 ring cigars, which have become a staple of new cigar brand releases, and are increasingly popular at retail.

In response, cigar accessory manufacturers have been forced to create ever-larger accessories to accommodate this size increase. Some modern cigar cutters can cleanly cut the cap of a cigar measuring an inch or more in diameter. Cigar torches have likewise grown in stature, and are now available from a single-flame pocket-sized torch to quint-flame desktop torches, which have five flames and larger tanks to fuel them.

In addition to discussing these trends, White advises cigars smokers to avoid overkill by not using such a large torch on a smaller cigar such as lanceros, a long, narrow cigar with a ring gauge around 38. For such cigars, a smaller single-flame torch provides greater accuracy and is less likely to scorch the tobacco, which can produce harsh, bitter flavors and aromas, according to White.