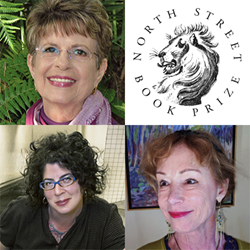 We received 400 entries from around the world.

The top winners each received $1,500, a marketing analysis and one-hour phone consultation with Carolyn Howard-Johnson (author of The Frugal Book Promoter), a $300 credit at BookBaby, and three free ads in the Winning Writers newsletter (a $450 value). Two honorable mention winners in each genre received $250. View excerpts from all nine winning entries with critiques by the judges.

Evans' Prosperity is a dystopian vision of contemporary Americans herded into a corporate-run debtors' prison. Prosperity occupies the same literary territory as the surreal short stories of George Saunders, where banality shades into horror, yet small acts of human connection create moments of grace inside a soulless bureaucracy. Honorable Mentions in Genre Fiction went to Glimmer by Tricia Cerrone, a military thriller about genetically enhanced teenagers, reminiscent of Robert Ludlum's spy classic The Bourne Identity; and Jem, A Girl of London by Delaney Green, a vivid and well-researched paranormal historical about an orphaned girl in 18th-century London who cross-dresses in order to practice medicine.

Weinberg's A Homicide in Hooker's Point is a gritty historical novel about the aftermath of domestic violence in a 1950s Florida sugar mill town. Through the eyes of Vicki, a sensitive, precocious child, one sees youthful idealism struggle to comprehend the gulf between law and justice. Honorable Mentions in Mainstream/Literary Fiction were awarded to Vacationland by Nat Goodale, a bittersweet story of a Maine lobsterman fighting gentrification, and Otter St. Onge and the Bootleggers by Alec Hastings, a rollicking adventure about a French-Canadian youth and his colorful family in the 1920s.

Kirschner's Waking the Bones is a gorgeous, searing memoir of recovery from child abuse. Her innovative style, cross-cutting between the past and the present, the literal and the mystical, captures the experience of a fractured mind reconstituting itself as a beautiful mosaic. Honorable Mentions in Creative Nonfiction went to Managing Bubbie by Russel Lazega, a gripping re-creation of his grandmother's escape from Nazi-occupied Europe, leavened with humorous present-day anecdotes of her life in America; and Deb McCarroll's The Long Hot Walk, a thoughtful account of her itinerant childhood in New Mexico with a schizophrenic mother.

About the North Street Book Prize:
The second annual North Street Book Prize accepts self-published books of literary fiction, genre fiction, and creative nonfiction (including memoir). Young Adult literature is eligible, but not books for children. Any year of publication is acceptable. The contest is open now through June 30, with three top prizes of $1,500 plus marketing support. The fee is $50. For guidelines, please visit https://winningwriters.com/north

About the Contest Sponsor:
Winning Writers was founded in 2001 to provide expert literary contest information and resources to the public. In addition to the North Street Book Prize, it sponsors the Tom Howard/John H. Reid Fiction & Essay Contest, the Tom Howard/Margaret Reid Poetry Contest, and the Wergle Flomp Humor Poetry Contest (no fee). Winning Writers is one of the "101 Best Websites for Writers" (Writer's Digest, 2015) and one of the "100 Best Websites for Writers" (The Write Life, 2016). Learn more at WinningWriters.com and join our 60,000+ Twitter followers at @winningwriters.

Gloria Taylor Weinberg, author of A Homicide in Hooker's Point

Carolyn Howard-Johnson, author of The Frugal Book Promoter, is a co-sponsor of the North Street Book Prize

BookBaby is a co-sponsor of the North Street Book Prize

The logo of Winning Writers