Affirmative Action or Not, Higher Education Perpetuates Racial Inequality According to a New Study by Georgetown University Center on Education and the Workforce

Every year, the United States continues to produce 111,000 college qualified African-American and Hispanic students who don’t get college degrees. 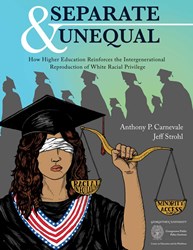 Georgetown University's Center on Education and the Workforce New Report.

The higher education system is more and more complicit as a passive agent in the systematic reproduction of white racial privilege across generations. This is the core finding in a new study by the Georgetown University Center on Education and the Workforce (CEW), Separate and Unequal: How Higher Education Reinforces the Intergenerational Reproduction of White Racial Privilege.

The authors find that white overrepresentation in the nation’s most elite and competitive colleges (top 468 colleges) is increasing even as the white share of college-age students has declined.

Even among equally qualified white, African-American and Hispanic students, these pathways are not only separate but they bring unequal results.

The authors find that access to the most selective 486 four-year colleges--and their greater completion rates--is especially important to African-Americans and Hispanics, in part because attaining a bachelor’s degree is an important threshold for racial equality in education and earnings.

•African-Americans and Hispanics who attend one of the top 468 colleges graduate at a rate of 73 percent compared with a rate of 40 percent for equally qualified minorities who attend open-access colleges.
•African-Americans and Hispanics gain a 21 percent annual earnings advantage when they attend the more selective schools compared to a 15 percent annual earnings premium for whites who attend the same colleges.

Anthony Carnevale, director of the center and the other coauthor, said, “The higher education system is color blind--in theory--but in fact operates, at least in part, as a systematic barrier to opportunity for many African-Americans and Hispanics, many of whom are college-qualified but tracked into overcrowded and underfunded colleges where they are less likely to develop fully or to graduate.”

The current dual postsecondary system leads to significant loss of talent and opportunity among both minorities and lower income students.

•More than 240,000 high school students every year, who graduate in the top half of their high school class and come from the bottom half of the family income distribution, do not get a two- or four-year degree within eight years of graduation from high school. The data show that roughly one in five (62,000) of these high-scoring/low-income students are African-American or Hispanic.

•There are more than 111,000 African-Americans and Hispanics who graduate from high school each year in the top half of their class but do not achieve a two- or four-year degree within eight years. If these students had attended one of the top 468 colleges and graduated at similar rates, 73 percent would have graduated.

The complete report Separate and Unequal: How Higher Education Reinforces the Intergenerational Reproduction of White Racial Privilege and its executive summary are available online at http://cew.georgetown.edu/separateandunequal.

The Georgetown University Center on Education and the Workforce is an independent, nonprofit research and policy institute that studies the link between individual goals, education and training curricula and career pathways. The Center is affiliated with the Georgetown Public Policy Institute. For more information, visit: http://cew.georgetown.edu. Follow us on Twitter @Cntredwrkfrce and on Facebook.