Sepsis Alliance Launches Maternal Sepsis Day to Raise Awareness of a Leading Cause of Pregnancy-Related Deaths.

Sepsis Alliance launches resources to reduce the increasing rate of maternal deaths in the United States. 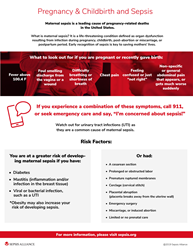 It’s critical to us as an organization to address the maternal mortality crisis by increasing maternal sepsis awareness among women, their partners, and healthcare providers.

On May 15, 2019, Sepsis Alliance, the nation’s leading sepsis organization, is launching Maternal Sepsis Day, an annual observance to raise awareness of the unique signs and symptoms of maternal sepsis, bring to life the personal experiences of the women who survived it, and remember those who have died.

Maternal sepsis is a life-threatening condition defined as organ dysfunction resulting from infection during pregnancy, childbirth, post-abortion or miscarriage, or the postpartum period. Maternal sepsis takes the lives of 261,000 women worldwide every year¹. In the United States, sepsis/infection is the third leading cause of pregnancy-related deaths².

“After I gave birth to my second baby girl, I went to see my nurse practitioner because I was vomiting, my breast milk had stopped abruptly, and my blood pressure was extremely low. But she sent me home,” said Maile Le Boeuf, a mother of two who is dedicated to raising awareness of maternal sepsis. “Four days later, I was admitted to the ICU for maternal sepsis. I was in a coma for two weeks, and I still live with the long-term effects of sepsis. Early recognition and treatment of maternal sepsis are critical to keeping moms alive and with their babies.”

Women who are pregnant or have recently given birth are at a greater risk of developing maternal sepsis if they have diabetes, mastitis, or a viral or bacterial infection, such as a UTI. Their risk also rises if they are obese. If a woman is pregnant, recently gave birth, or had an abortion or a miscarriage and she has a combination of two or more of the following symptoms, she should seek immediate medical attention and say: “I’m concerned about sepsis.”

The symptoms of maternal sepsis include:

Other risk factors for women who are pregnant or recently gave birth include, having a cesarean section, prolonged or obstructed labor, premature rupture membranes, cerclage (cervical stitch), placental abruption, emergency surgery, and limited or no prenatal care. Urinary tract infections (UTI) are a common cause of maternal sepsis.

Sepsis Alliance recently released a free downloadable infographic to help women who are expecting and who have recently given birth learn the signs and symptoms of maternal sepsis, the associated risk factors, and when to seek medical attention. In tandem, Sepsis Alliance released an online toolkit to help anyone raise awareness of maternal sepsis.

With the help of generous gifts from their supporters, Sepsis Alliance is working to produce a Maternal Sepsis Education Module to educate OB-GYNs, OB nurses, midwives, doulas, and all healthcare providers dedicated to women’s health about maternal sepsis. Anyone interested in making a gift to help produce this resource can do so by clicking here.

About Sepsis Alliance
Sepsis Alliance is the leading sepsis organization in the U.S., working in all 50 states to save lives and reduce suffering by raising awareness of sepsis as a medical emergency. In 2011, Sepsis Alliance designated September as Sepsis Awareness Month to bring healthcare professionals and community members together in the fight against sepsis. In 2018, Sepsis Alliance created the award-winning national campaign, It’s About T.I.M.E.™ to educate the public about the signs and symptoms of sepsis and to highlight the urgent need to seek treatment when symptoms are recognized. Sepsis Alliance gives a voice to the millions of people who have been touched by sepsis – to the survivors, and the friends and family members of those who have survived or who have died. Since 2007, sepsis awareness in the U.S. has risen from 19% to 65%. Sepsis Alliance is a GuideStar Platinum Rated charity. For more information, please visit http://www.sepsis.org. Connect with us on Facebook and Twitter at @SepsisAlliance.