Sepsis Alliance Raises $250,000+ to Save Lives from Sepsis, the 3rd Leading Cause of Death in the U.S. 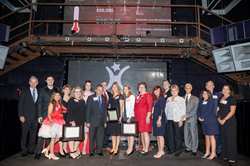 “Sepsis is the public health crisis that no one is talking about,” said Daniel Emmet,Caesar’s Headliner and America’s Got Talent finalist. “I’m so honored to be part of a night like this that honors the individuals and organizations fighting to save lives from sepsis"

On September 12, 2019, Sepsis Alliance raised more than $250,000 at the 8th annual Sepsis Heroes gala, which honored passionate individuals and innovative organizations dedicated to raising sepsis awareness, improving the treatment of sepsis and saving lives. Sepsis is the body’s life-threatening response to an infection that affects 1.7 million Americans every year and takes a life every two minutes.

“The funds raised at the gala will help us save lives from sepsis by continuing to provide free sepsis awareness, support, and educational materials to the public, and essential sepsis training to healthcare providers across the continuum of care,” said Thomas Heymann, President and Executive Director of Sepsis Alliance.

Daniel Emmet, Caesar’s Headliner and America’s Got Talent finalist, debuted his new original song “While You Can” at the gala. Written for Sepsis Alliance, the song was inspired by the millions of people who are impacted by sepsis each year. “While You Can” was written by Emmet, his music director and conductor Jerry Williams, and Grammy-award-winning songwriter Frank Meyers.

“Sepsis is the public health crisis that no one is talking about,” said Emmet. “I’m so honored to be part of a night like this that honors the individuals and organizations fighting to save lives from sepsis and that brings attention to the estimated 270,000 lives lost to sepsis every year, just in the United States.”

Kentucky Family, Career and Community Leaders of America (FCCLA), and sepsis survivor Darrell Raikes, a sepsis survivor and advocate, were jointly awarded the 2019 Erin Kay Flatley Spirit Award. They were honored for giving 100 sepsis presentations to thousands of students throughout Kentucky.

Last year’s Erin Kay Flatley Spirit Award winner, Angelica Hale, returned to the gala to perform her single “No Time to Waste,” which she penned about overcoming life’s trials and her personal experience surviving sepsis when she was only four years old.

Sepsis Alliance invites those interested in raising sepsis awareness and helping saving lives to learn more at sepsis.org, or to give today by texting SEPSIS, their name, and gift amount to 41444.

About Sepsis Alliance:
Sepsis Alliance is the leading sepsis organization in the U.S., working in all 50 states to save lives and reduce suffering by raising awareness of sepsis as a medical emergency. In 2011, Sepsis Alliance designated September as Sepsis Awareness Month to bring healthcare professionals and community members together in the fight against sepsis. In 2018, Sepsis Alliance created the award-winning national campaign, It’s About T.I.M.E.™, to educate the public about the signs and symptoms of sepsis and to highlight the urgent need to seek treatment when symptoms are recognized. Sepsis Alliance gives a voice to the millions of people who have been touched by sepsis – to the survivors, and the friends and family members of those who have survived or who have died. Since 2007, sepsis awareness in the U.S. has risen from 19% to 65%. Sepsis Alliance is a GuideStar Platinum Rated charity. For more information, please visit http://www.sepsis.org. Connect with us on Facebook and Twitter at @SepsisAlliance.

Daniel Emmet, Caesar’s Headliner and America’s Got Talent finalist, performing his new original song “While You Can” at the 2019 Sepsis Heroes gala.

Angelica Hale, America's Got Talent runner-up and sepsis survivor, performing her single “No Time to Waste."