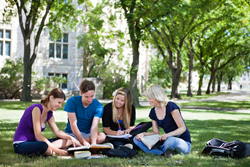 There are more than 13 million full-time college students in the United States right now, and a staggering 23% of them meet the medical criteria for substance abuse or dependence (The National Center on Addiction and Substance Abuse calculation). That means three times as many college students are dependent on drugs or alcohol, than the general population. Serenity Recovery Center of Marne, Michigan has issued a guide specifically for college campuses to help educate and prevent addiction.

In many cases, college students lack the facts about drugs and alcohol. “Say ‘no’ to drugs” campaigns of adolescence traditionally don’t translate well to college campuses, where young people face different forms of peer pressure and stressors.

College students encounter many forms of drugs and alcohol consumption, but primarily three categories of potentially addictive substances: alcohol, marijuana and prescription drugs. Through information about addiction, college students are better equipped to understand and combat the risks of each.

While underage drinkers only consume about 11% of all alcohol, an estimated 90% of that is in the form of binge drinking (PDF). Serenity Recovery recognizes the need to educate young people about safe alcohol consumption and healthy socialization without binge drinking.

Many young people do not know what constitutes “one drink,” and therefore intoxication levels. The delayed effects of alcohol, compounded by a drinking atmosphere, can lead to dangerous levels of alcohol consumption. Statistically, regular alcohol consumption more frequently leads to addiction, possibly creating a life-long dependency.

The National Institute on Drug Abuse recently released figures on college marijuana use, finding that daily marijuana use is higher than any year since 1980, surpassing cigarette smoking on college campuses. In many cases, young people have misinformation about marijuana, believing it to be non-habit- forming or even healthful, yet missing data about potential risks of marijuana consumption.

New evidence suggests that marijuana can indeed be addictive, particularly when consumed regularly by younger people. Even in states where recreational marijuana has been legalized, the legal age is 21, like the legal drinking age. As laws and research emerge, college campuses need resources for educating staff and students.

Considering the staggering cost of addiction, in terms of treatment, crime, healthcare and law enforcement, cooperation across agencies with colleges and universities improves the lives of students but also the health of communities.

Serenity Recovery is committed to assisting the community in education and substance abuse prevention and recovery.This issued guide is just one of the ways Serenity is furthering this education. For more information, please visit the Serenity Recovery website, or call them at 1-855- 218-3775.