Global Music Soundscapes: The Time is Right for a Three-Hour Musical Mosaic titled Sounds from the Circle VI 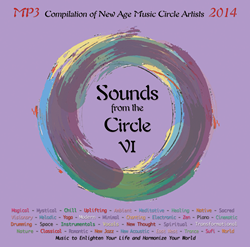 Sounds from the Circle, Vol. 6

The 40 tracks included provide listeners over three hours of music that defies classification!

Some say there is magic in numbers. As The New Age Music Circle launches its sixth Sounds from the Circle compilation, including 40 artists, the numbers seem to be in its favor. Numerologist Kathy Bernstein said that 2013 – which, added together as digits, equals 6 - was a year of awakening and taking responsibility, and in 2014, music writers seem to be doing just that with a renewed interest in New Age music.

Taste-making music editors at Rolling Stone, The NY Times, The Vinyl Factory and others recently gave a long-overdue nod to the New Age genre with their positive coverage of the retrospective release I Am The Center: Private Issue New Age Music in America, 1950–1990 by reissue specialists at Light in the Attic, which is already sold out in some formats. Consequently, they and many others seem to be discovering the wealth of international talent currently creating New Age music, and the hundreds of internet and terrestrial radio stations and blogs dedicated to supporting the music 24/7, all over the world.

John Olsen, editor of New Age Music World, included the fourth compilation in his list of Top Ten albums of the year, writing “Sounds from the Circle 4 is one of the best song collections of new age and sub-genres in 2012. Like all Circle Albums, the fourth release is a quality-driven song compilation sampler.”

Now, for the sixth straight year, the New Age Music Circle – an online community of over 1600 artists (both established and developing) – is releasing a new sampler presenting a microcosm of today’s international New Age music scene. Sounds From the Circle VI (SFTC VI) is the sixth in a series produced by the founder of the network, Suzanne Doucet, and associate produced by Beth Ann Hilton. In recent years, international radio programs dedicated entire programs to playing the compilation start to finish as a pre-programmed show, both promoting and launching new music worldwide.

The 40 tracks included provide listeners over three hours of music that defies classification, Doucet says. This particular volume contains music from 2 GRAMMY® winners, 3 GRAMMY® nominees, numerous ZMR Award winners, and some of the best new music available from across the globe today. Since there is not one particular New Age sound, Doucet says, the Sounds of the Circle compilations are eclectic, yet carefully sequenced to take listeners on a relaxing sonic journey to discover new sounds and artists. Together, the tracks capture a broad scope of music from Electronica to Native American flute, from Solo Piano to lush New Age Instrumentals, from Ambient Space to Channeled Vocalizations, from Mountain Dulcimer to Chillout, from healing Harp to Indian World Fusion.

Many of the involved artists market their music for more than just entertainment, suggesting its use for relaxation, meditation, massage therapy, Feng Shui, and even as tools to enhance creativity, improve sleep, or to help individuals with ADD, ADHD and PTSD achieve a state of calmness and increased focus.

Each artist’s music is available for sale online, and many of their Visual Music videos can be seen on the Sounds From The Circle Channel on Youtube at http://bit.ly/1kreF13.

The annual compilations – available in both physical and digital formats – have become favorites among everyday music fans, professional radio programmers, and massage therapists who love the ability to play over three hours of relaxing music from just one CD. Each artist receives multiple copies to sell or give to their fans, and thousands more are distributed at various music conferences, Conscious Community events, and health/wellness expos (such as GATE, MIDEM, INATS) throughout the year.

Doucet, who is an artist, composer and leading consultant for the New Age market, maintains that the New Age music category is a healthy and growing international music niche. In late 2008, she harnessed the community-building opportunities on NING.com, founded the New Age Music Circle (newagemusik.ning.com), and watched the community steadily grow to include over 1600 people worldwide. Members enjoy sharing music, videos, event information, artwork and invitations to collaborate in various ways; one must be a member of the Circle to contribute to the annual compilations.

Doucet utilizes top-quality MP3 files to pack the ultimate amount of music onto the physical CDs. She begins by inviting Circle members to submit their tracks, screens them for quality, then arranges the music to create the ultimate “flow” -- no easy feat with approximately forty tracks and over three hours of music on each album. The overall process for producing each compilation takes about four months.

The physical compilations, manufactured by TSI in Valencia, CA, must be played in MP3-compatible CD players or in computer CD-ROM drives, and will download into iTunes. Packaging is a colorful eco-friendly cardboard sleeve with inserts listing each artist’s name, track, album title, cover art, and website address.

SFTC VI is truly “Music to Enlighten Your Life and Harmonize Your World,” a by-line of the New Age Music Circle. For more information, media review copies, and promotional giveaways, contact Beth Ann Hilton, The B Company, bethhilton(at)theBcompany(dot)com.

About NAMC:
The New Age Music Circle – an online community of over 1600 artists, industry professionals and fans –presents its sixth MP3 compilation in as many years, aptly titled Sounds from the Circle VI. Produced by Suzanne Doucet, founder of the Circle, the compilations have become favorites among music fans as well as professional radio programmers and wellness practitioners who appreciate the ability to play almost four hours of music without stopping. It is available in both physical format and this iTunes version, which offers all of the tracks available on iTunes at time of launch. The Sounds of the Circle compilations are always eclectic, showcasing the wide range of inspiration, interpretation and musical vision within the New Age genre from countries across the globe including the USA, Canada, Australia, Argentina, England, Norway, Germany, Singapore, South Africa, Spain, Venezuela and more. Find out more about this music, or join the New Age Music Circle, at http://newagemusik.ning.com.