Physicians with Houston, TX based SignatureCare Emergency Centers are reporting huge spike in the number of patients coming into the emergency rooms with flu symptoms. 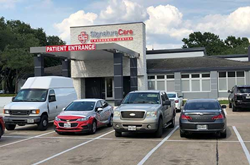 Physicians with SignatureCare Emergency Centers throughout Texas are reporting a surge in the number of patients coming into the emergency room with flu symptoms.

According to the ER physicians, the number of flu patients coming into the ER spiked during the holidays compared to the previous month.

“We expected an increase due to the seasonal cold weather but I don’t think anyone expected this many patients coming in with the flu. One reason could be that some Texans may not have received their annual immunizations,” said Dr. Hashibul Hannan, a board-certified emergency room physician and managing partner at SignatureCare Emergency Center.

Dr. Hannan urged Texas families who have not received their immunizations to consider doing so as soon as possible.

“Immunizations are designed to prevent families from spreading the flu virus but it only works if they receive their flu shots. If they fail to get their flu shots, they leave themselves and everyone around them vulnerable to the flu virus. It is essential that families get immunized,” he said.

Dr. Hannan added that “the influenza virus can be especially dangerous for children, the elderly and those with compromised immune system due to other illnesses. These individuals are especially susceptible to the flu virus and could be at greater risk of complications from the flu, so it is important that they are up to date on their flu shots”.

“Our goal at SignatureCare is to keep Texas families healthy. We care about our neighbors and we are always looking for ways to help the community stay healthy. That is why we are sounding this alarm to let our fellow Texans know that it may be time to get immunized, if they have not done so already,” Dr. Hannan said.

The Texas Department of State Health Services said in its Current Extended Flu Activity Report released January 10, 2020, that flu activity in the state jumped during the last week of December 2019.

Also, the Centers for Disease Control and Prevention (CDC) confirmed that the number of flu patients visiting emergency rooms throughout the nation was higher than normal during the holidays in several states.

According to the CDC, several states, including Texas, saw higher flu activities during the month of December, 2019. An Influenza Surveillance Report prepared by the Influenza Division of the CDC said Influenza-Like Illness (ILI) activity level was widespread in 45 states including Texas, and Puerto Rico, while other states saw low to moderate flu activities.

The CDC has also released a short video showing steps families can take to protect against the influenza virus.