This internationally significant rarity is consigned directly by a lineal descendant of W. T. Sherman. 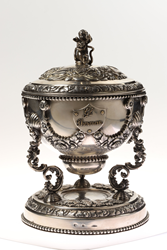 "This piece itself is a remarkable example of mid-19th century Mexican craftsmanship. Its weight and size are impressive. But beyond aesthetics, the stories behind it - both told and yet to be told - put this previously unknown historical find in a class all unto itself." - Expert Jay Williamson

John McInnis Auctioneers, the largest full-service auction house on Boston's North Shore, is excited to present this breathtaking treasure on Friday, May 10th as part of its upcoming two day, 850 lot mid-spring sales event. Ornately decorated, this vessel is fully hallmarked and is world-class both in its workmanship and historical framework. This presentation cup, as well as all items from this sale, are on display in the McInnis' Amesbury, MA auction gallery and are available for preview starting on May 8th. For more information, please see http://www.mcinnisauctions.com.

This cup - lot #0011 - is truly sensational. Conservatively estimated at $10,000 - $20,000, it measures 8 x 6 inches and weighs in at 75 troy ounces - over four pounds! The cup's elaborate detailing match aesthetics popular to its mid to late 1860s production. The cover is hand-chased with repeating floras and surmounted with a finial in the form of a sculpted infant holding a snake; the cup itself is decorated with beadwork and flower swags and is supported by three scrolled legs embellished with scallop shells, complementary chase work, and more beads. A central feature of the cup is its prominent raised shield inlaid with the words "GL Sherman" and three gold stars. Beneath the base of the cup has the French phrase "Memoria de Gratitud - Un Mexicano" engraved in elegant cursive writing. The piece is stamped by its makers "A. HERRERA" and "CAMACHO" on its base, font, and cover.

This silver presentation award is an exquisite merger of Mexican and French themes, culture, manufacturing, language, and aesthetics - and perfectly aligns with its little known backstory of international cooperation, strategic planning... and intrigue.

General William Tecumseh Sherman (1820-1891) is best known for leading the Union Army to victory over the Confederacy during the American Civil War. A strong military strategist, he was later appointed Commanding General of the Army by President Grant. This position is analogous to today's rank of Chief of Staff of the Army and is usually held by the highest-ranking officer on active duty in the Army. President Johnson sent Sherman to Vera Cruz to insure and oversee the departure of 28,000 French troops from Mexico as laid out in an agreement between the United States and France in 1866. Sherman received this presentation award as a personal gift from the tenuously French-installed Mexican leader in the late 1860s, perhaps as a goodwill gesture to curry favor between America and his intent to remain in Mexico as its leader.

According to John McInnis Auctioneers specialist Jay Williamson, “There is no question that Francophiles, historians, and museums on two continents will be interested in this significant discovery. It is thrilling to be able to offer this cup on behalf of the family. The piece itself is a remarkable example of mid-19th century Mexican craftsmanship. Its weight and size are impressive. But beyond aesthetics, the stories behind it - both told and yet to be told - put this previously unknown historical find in a class all unto itself. I have handled millions of dollars’ worth of antiques for McInnis, and this find in the category of Historic Americana compares only to a Revolutionary War-era sword that we discovered and sold for over $100,000."