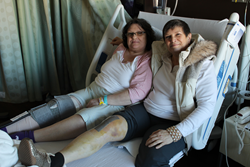 Sisters Jan Senkbeil and Judy Howell both needed new right knees. They got them at the same time at Mercy in Springfield with no out-of-pocket costs, thanks to a Centers of Excellence program.

There were no logistics to worry about. At home you do what needs to be done, but this is all about me and I love it.

Most family reunions don’t happen in a hospital hours away from home after a specialized surgery. But for two sisters with new right knees who hadn’t seen each other in years, it’s been a wonderful experience.

Judy Howell works for Walmart in Bentonville, Ark., and was days away from scheduling a knee replacement surgery when she learned that she could have that surgery, with no out-of-pocket costs, two hours away in Springfield. At the same time, her sister, Jan Senkbeil, who works for Lowe’s in Ypsilanti, Mich., had been putting off a knee replacement for three years.

“As soon as I read the email at work that said we could get knee and hip replacements for no additional costs, I texted my husband,” said Senkbeil. “I told him, ‘I’m getting my new knee for free!’”

The benefit took effect on Jan. 1, 2014, after Walmart and Lowe’s joined the Pacific Business Group on Health Negotiating Alliance to enhance the medical care their employees receive while reducing costs. Employees and dependents who are enrolled in the companies’ medical plans are eligible for no-cost knee and hip-replacement surgeries at one of four hospital systems that have been named “Centers of Excellence.” Those included in this first of its kind national COE network are Mercy Hospital Springfield in Springfield, Mo.; Johns Hopkins, Bayview Medical Center in Baltimore, Md.; Kaiser Permanente Orange County Irvine Medical Center in Irvine, Calif., and Virginia Mason Medical Center in Seattle, Wash. Along with no out-of-pocket medical costs, the coverage also pays for travel, lodging and living expenses for the employee and a caregiver.

“When I found out this took effect on January 1st, I was on the phone on January 2nd,” said Howell. Meanwhile, Senkbeil started faxing in her paperwork. But the sisters hadn’t told each other about their surgery plans. It took a post on Facebook for them to realize they were taking advantage of the same benefit at approximately the same time. “At first I wasn’t sure if that was her status or if she liked my status,” laughed Howell. They hadn’t seen each other since 2009.

Turns out, the two had the same coordinator and medical navigators making all their arrangements, so they mentioned the coincidence. “That’s when they did some real coordination to make sure we could overlap for at least part of the time,” explained Senkbeil.

The sisters both started researching Mercy Orthopedic Hospital Springfield and the doctors who were assigned to their surgery. They traded notes, and read everything they could get their hands on to make sure this was the best decision for both of them. “When I found out this facility really was one of the best in the nation, I was sold,” said Howell.

Howell had her surgery on Thursday, Feb. 20, while Senkbeil’s surgery took place on Tuesday, Feb. 25. Both are recovering well and looking forward to a better quality of life, which is exactly why the program was designed: to provide the best care while reducing employees’ medical expenses.

Family reunion aside, the sisters agree going away for surgery was actually easier than having it done in their home towns. Mercy arranged everything from transportation to hotel accommodations and medical appointments. “There were no logistics to worry about, other than getting someone to cover for me at work and stocking the refrigerator for the house sitter,” said Senkbeil.

Howell agrees. “I’ve felt like a celebrity! Plus, being out of the home setting allows you to focus on what you’re here for.” Senkbeil added, “At home you do what needs to be done, but this is all about me and I love it.”

Howell works in program management for Walmart’s information system department, and says she knows a good process when she sees one. “This really is a Center of Excellence. They had a vision for what a facility could be and here it is. Plus, they have the right team in place to make it all happen.”

The sisters aren’t only pleased with the program and their surgeries, they have a real appreciation for the employers who made it all possible. “Lowe’s is very forward-thinking, and this is a really great benefit to offer associates. When you give great benefits, you get great employees,” said Senkbeil. Howell chimed in, “Walmart has found an appropriate way to control costs for its associates while making sure the care is the absolute best. I think it’s great.”

After this experience, both sisters think other companies should look into destination medicine agreements. “I think it’s the future of health care in the U.S.,” said Howell. The impromptu family reunion was a great bonus, too. “We got to catch up on the nieces and nephews,” Howell said with a smile.

Sisters Jan Senkbeil and Judy Howell didn't know they were both planning to travel to Springfield, Mo. for surgery until a post on social media. They got no-cost knees and a family reunion.