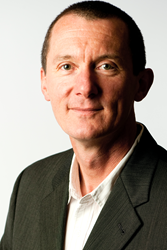 Intimately involved in every aspect of the Netflix pipeline, Neil is positioned to offer unique insight into the strategy and success of the world's leading Internet television service.

The Society of Motion Picture and Television Engineers® (SMPTE®), a leader in motion-imaging standards and education for the communications, media, entertainment, and technology industries, today announced that Dr. Neil Hunt, chief product officer at Netflix, will present the keynote address at the Entertainment Technology in the Internet Age (ETIA) conference, this year scheduled for June 16-17 at Stanford University near Palo Alto, California. Titled "The Race Is On!", the conference will explore past, current, and future technology requirements for delivering a compelling entertainment experience on the Internet.

"Though Neil Hunt once was called 'the most important Netflix executive that nobody's ever heard of,' other leaders across the media and entertainment industry are well aware of his tremendous engagement and influence in the world of Internet-delivered entertainment content," said Pat Griffis, education vice president at SMPTE and ETIA 2015 conference program chair. "Intimately involved in every aspect of the Netflix pipeline, Neil is positioned to offer unique insight into the strategy and success of the world's leading Internet television service. His keynote address and his participation on a session panel will enrich an already-exciting ETIA conference program."

During the ETIA 2015 conference, more than a dozen sessions will bring technical, creative, and ecosystem experts together to explore how the Internet is changing entertainment and to provide context that will aid attendees — engineers, creatives, and researchers focused on the future of entertainment over the Internet — in understanding both technology and application trends. Kicking off the afternoon of the first day, Hunt's keynote address will look at how the content creation community and the titans of the Internet can better collaborate in providing compelling content to consumers. Hunt will discuss the challenges of this proposition, as well as the benefits it could bring to all parties, particularly the consumer.

Hunt oversees Netflix technology including the streaming platform and the vast amount of user data that supports algorithms used to recommend content to members. He leads a team that is responsible for the design, implementation, and operation of the technology behind the Netflix service — the website, mobile, and Smart-TV experiences that enable members to subscribe, select shows and movies using personalized recommendations or the search function, and stream them to any of more than 1,000 different kinds of devices for viewing. The team is also responsible for the delivery pipeline: the encoding, storage, and delivery of over 100 million hours of streamed content per day to more than 62 million Netflix members in more than 50 countries.

Hunt also will take part in the panel session titled "Show Me the Money, Sonny!" He will join Todd Collart, cofounder, general manager, and senior vice president of Deluxe OnDemand, and Phil McKinney, president and CEO of CableLabs, to discuss the tradeoffs that over-the-top (OTT) service providers must address when balancing more, faster, and better pixels against bit budgets, as well as the impact of these considerations on deployment scenarios. Allan McLennan, president and chief analyst at The PADEM Group, will moderate the session.

Further conference highlights include a session that builds on the buzz about virtual reality (VR) and augmented reality (AR) generated earlier this year at the NAB Show's Technology Summit on Cinema (TSC), produced in partnership with SMPTE. "Advances and Challenges in AR/VR for Entertainment" will feature Arthur van Hoff, chief technology officer of Jaunt; Steven Feiner, professor of computer science at Columbia Engineering, where he directs the Computer Graphics and User Interfaces Lab and co-directs the Columbia Vision and Graphics Center; Chris Ullrich, vice president of user experience at Immersion, a leading innovator in tactile feedback technology; Tish Shute, director of product experience at Immersion; Stefano Baldassi, head of perceptual interactions and user research at Meta; and session moderator Soren Harner, chief product officer at Meta. These experts will explore recent advances in VR and AR technology, reviewing the latest in display, mobile device, and sensor technologies and discussing how they apply to entertainment and enable new ways of telling stories.

"Not So Safe: Entertainment on the Web" is a special evening session scheduled for June 16. Representing key areas of the Web ecosystem, a panel of industry leaders and security experts will explore the latest technical options and how content providers — including traditional studios and OTT incumbents — and cloud-solution providers are dealing with the challenges of securing content in the new age of Internet-based content distribution. The session will be moderated by Kari Grubin, vice president of mastering at The Walt Disney Studios, and it will feature Usman Shakeel, principal solutions architect at Amazon Web Services; Tom Paquin, chief technology officer at OnLive; Frank Artes, director of IT and security at MaxPlay; Wendy Frank, partner at BFI Security Consulting; Ted Harrington, executive partner at Independent Security Evaluators; and Chris Chen, CIO and CTO at Prime Focus/DAX. This session is included with conference packages and may also be purchased separately.

Additional ETIA 2015 sessions also will focus on Internet image quality and the impact of higher spatial temporal resolution, along with higher dynamic range and color gamut; compression efficiency versus image quality and pixel mix; and the use of a new electro-optical transfer function — perceptual quantizer — based on human perception. Panels will explore the relationship between ROI and image quality for OTT services, as well as challenges and solutions related not only to video delivery, app creation, device compatibility, and content management but also to delivering live content over the Internet to tablets, smartphones, and computers. Further sessions will address object-oriented audio in the theater and for the home; disruptive innovation in game entertainment via the Internet; and the question of whether consumers will choose to buy and own content when it is readily accessible from the cloud. A session dedicated to net neutrality will review developments over the past year, as well as the impact of U.S. decisions on the rest of the world.

About the Society of Motion Picture and Television Engineers® (SMPTE®)
The Oscar® and Emmy® Award-winning Society of Motion Picture and Television Engineers® (SMPTE®), a professional membership association, leader in the advancement of the art, science, and craft of the image, sound, and metadata ecosystem, worldwide. An internationally recognized and accredited organization, SMPTE advances moving-imagery education and engineering across the communications, technology, media, and entertainment industries. Since its founding in 1916, SMPTE has published the SMPTE Motion Imaging Journal and developed more than 800 standards, recommended practices, and engineering guidelines.

More than 6,000 members — motion-imaging executives, engineers, creative and technology professionals, researchers, scientists, educators, and students — who meet in Sections throughout the world sustain the Society. Through the Society's partnership with the Hollywood Professional Alliance® (HPA®), this membership is complemented by the professional community of businesses and individuals who provide the expertise, support, tools, and infrastructure for the creation and finishing of motion pictures, television programs, commercials, digital media, and other dynamic media content. Information on joining SMPTE is available at http://www.smpte.org/join.

All trademarks appearing herein are the property of their respective owners.