Sennheiser has been named a CES 2016 Innovation Awards Honoree for its state-of-the-art Orpheus headphones. Just recently announced, the electrostatic headphone system has been honored in both the ‘Headphones’ Category and the ‘High Performance Home Audio-Video’ Category. 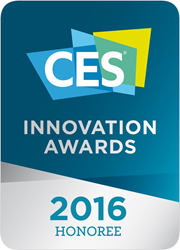 Sennheiser’s Orpheus has been named a CES 2016 Innovation Awards Honoree in both the ‘Headphones’ Category and the ‘High Performance Home Audio-Video’ Category.

With the new Orpheus, Sennheiser has set out to push the boundaries of high end audio, making no compromise as we set out to create the best headphones in the world

Sennheiser has been named a CES 2016 Innovation Awards Honoree for its state-of-the-art Orpheus headphones. Just recently announced, the electrostatic headphone system has been honored in both the ‘Headphones’ Category and the ‘High Performance Home Audio-Video’ Category. Sennheiser’s Orpheus, which will be hand-crafted in Germany and available from mid-2016, impressed the jury with its combination of the most innovative technology with carefully selected materials and highest-quality craftsmanship. It is a masterpiece that has its price: the high-end headphones will cost around € 50,000. Products entered in the prestigious CES Innovation Awards program are judged by a preeminent panel of independent industrial designers, engineers and members of the trade media to honor outstanding design and engineering in cutting-edge consumer electronics products across 27 product categories.

“With the new Orpheus, Sennheiser has set out to push the boundaries of high end audio, making no compromise as we set out to create the best headphones in the world,” said Maurice Quarré, Director Business Segment Select & Audiophile at Sennheiser. “The new Orpheus is the successor to our 1990/1991 iconic Orpheus, which set the benchmark for that generation. The incredible critical response to the launch of the new Orpheus – epitomized by this honor from the CES Innovation Awards – is a recognition that Sennheiser is succeeding in shaping the future of the audio world.”

Officially announced in November 2015, the Orpheus surpasses every other existing headphone system by offering the ultimate in reproduction precision, with the lowest total harmonic distortion that has ever been measured in an audio reproduction system, exceptional spatiality and a frequency response that extends far beyond the range of human hearing ability.

To make this possible, a team of Sennheiser experts spent almost a decade continuously working against the limits of what is technically feasible – and once again created the best headphones in the world. The Orpheus uses an innovative amplifier concept that combines to perfection the advantages of a tube amplifier with those of a transistor amplifier.

“The advantage of tube amplifiers is their superior impulse processing,” said Axel Grell, Portfolio Manager Audiophile at Sennheiser. “However, one challenge is their sensitivity to structure-borne-noise. For this reason, the amplifier housing was crafted from Carrara marble and is freely suspended with the amplifier.”

The decoupling of the tubes in combination with the damping properties of the marble has the effect of reducing structure-borne noise to an absolute minimum. The tubes themselves also have a high-quality patent-pending enclosure consisting of quartz-glass bulbs that perfectly shield them from their surroundings. The tube amplifier stage is followed by a patented ultra-high impulse amplifier stage that is directly integrated into the cups of the headphones. The result is impressive: a 200 percent rise in efficiency compared to other products.

Meticulous attention was paid to every detail of the material selection for the Orpheus in order to fully exploit the sound potential of the reference headphones. Each of the more than 6,000 individual components was carefully chosen, their acoustic characteristics were evaluated and finally the optimum combination was put together. In other examples of this uncompromising design ethos, Sennheiser used gold-vaporized ceramic electrodes and platinum-vaporized diaphragms to ensure the outstanding performance of the acoustic unit.

About the CES Innovation Awards
The prestigious CES Innovation Awards are sponsored by the Consumer Technology Association (CTA)TM, the producer of CES 2016, which runs January 6-9, 2016, in Las Vegas, Nevada. CES is the global gathering place for all who thrive on the business of consumer technologies, and have been recognizing achievements in product design and engineering since 1976. Entries are evaluated on their engineering, aesthetic and design qualities, intended use/function and user value, how the design and innovation of the product directly compares to other products in the marketplace and unique/novel features present. Products chosen as CES Innovation Honorees reflect innovative design and engineering in some of the most cutting edge tech products and services coming to market. They are featured on CESweb.org/Innovation.

About Sennheiser
Audio specialist Sennheiser is one of the world’s leading manufacturers of headphones, microphones and wireless transmission systems. Based in Wedemark near Hanover, Germany, Sennheiser operates its own production facilities in Germany, Ireland and the USA and is active in more than 50 countries. With 18 sales subsidiaries and long-established trading partners, the company supplies innovative products and cutting-edge audio solutions that are optimally tailored to its customers’ needs. Sennheiser is a family-owned company that was founded in 1945 and which today has 2,700 employees around the world that share a passion for audio technology. Since 2013, Sennheiser has been managed by Daniel Sennheiser and Dr. Andreas Sennheiser, the third generation of the family to run the company. In 2014, the Sennheiser Group had sales totaling €635 million. http://www.sennheiser.com