An international research team including members of the Snow Leopard Trust encounters a 2-week-old wild snow leopard cub in its den; a rare glimpse of the first days in the life of these endangered, elusive cats. 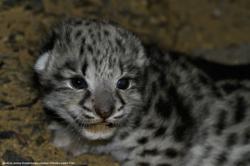 A symbol of hope for an endangered cat

Finding a wild snow leopard cub in its den is rare and exciting in its own right – the first ever such encounter took place only last year. This most recent discovery could be particularly significant though, as the international team of scientists that found this little cub believes they know not only its mother, a cat called Agnes, but possibly its father as well, a male named Ariun. Before locating the den site, the team had been tracking both of these cats with GPS collars for several months as part of the Snow Leopard Trust’s pioneer long-term snow leopard study in Mongolia’s South Gobi desert.

“Beyond conception, very little is known about the role of snow leopard fathers in the wild,” says Gustaf Samelius, a member of the team that encountered the cub. “Being able to monitor both parents of a newborn cub as it grows could yield exciting new insights, says Samelius, who is the Snow Leopard Trust’s Assistant Director of Science and a researcher with the Swedish University of Agricultural Sciences (SLU), “so we’re eagerly awaiting the results of genetic analysis to see if Ariun is indeed the cub’s father.”

Analyzing their GPS locations, Örjan Johansson, a PhD student with the Snow Leopard Trust and SLU, had observed the two cats, Agnes and Ariun, spending several days in very close proximity earlier this spring. Snow leopards are usually solitary cats, so this type of behavior often indicates that two cats are mating. Several weeks later – as if on schedule – Agnes started to restrict her movements in a way that suggested she was preparing to give birth. “When we were fairly certain that she had given birth, we followed the VHF signals transmitted by her collar in order to find her den,” says Gustaf Samelius.

On June 21, Gustaf Samelius and his colleagues - Sumbe Tomorsukh of Mongolia and Australians Jeremy Krockenberger and Carol Esson - located the exact spot where Agnes had set up her den. Once they were certain she was a safe distance away, the scientists were able to briefly enter the den, examine, and photograph her 2 week-old cub. They took hair samples that will allow them to establish the cubs’ genetic identification and confirm sex. They also took weights and measurements, and implanted a tiny microchip - called a PIT tag - for identification, similar to those used by pet owners.

”We still know very little about how snow leopards reproduce in the wild. It has taken years of sustained scientific effort for us to able to begin documenting birth rates, sex ratios, cub sizes, litter sizes or cub survival rates – all of which are critical to our work to save these endangered cats. Getting the rare opportunity to observe a cub in its den is huge for us,” says Charudutt Mishra, the Snow Leopard Trust’s Science and Conservation Director. “The team handled the cub with care and took their measurements as quickly as possible.”

A Visit from Dad?
Back in the study base camp, the team looked at GPS data from presumed father Ariun’s collar and compared it to the exact den location. “As we compared the data, we realized that Ariun had been within a few feet of the den a week after the cub’s birth, while Agnes, the cub’s mother, was almost a mile away,” Gustaf Samelius says. “We can’t tell if he was actually inside the den or what he did there, but it’s a fascinating behavior to observe – especially if Ariun really does turn out to be the father”.

Snow Leopards – the Elusive Ghosts of the Mountain
There are as few as 3,500-7,000 snow leopards left in the wild—and due to their elusive nature, encounters are so rare that the cats are often referred to as “ghosts of the mountain.” Accordingly, our understanding of the cats’ ecology and behavior remains limited. However, an international team of scientists has been conducting a pioneering long-term snow leopard study in Mongolia’s South Gobi desert since 2008, tracking the cats with GPS collars and research cameras and expanding our knowledge about this endangered species by leaps and bounds.

Acknowledgements:
The efforts of Snow Leopard Trust and Snow Leopard Conservation Foundation in Mongolia are carried out in partnership with the Mongolian Ministry of Nature, Environment and Green Development, the Mongolia Academy of Sciences, Nordens Ark and Swedish University of Agricultural Sciences.

Our Long-Term Ecological Study (LTES) of snow leopards in Mongolia began as a collaboration between the Snow Leopard Trust, Snow Leopard Conservation Foundation, and Panthera in 2008. As of January 1, 2013, Panthera no longer actively participates in LTES. We continue to work cooperatively with Panthera on analyzing data collected through 2012, including information from Agnes and Ariun's collars.