New Spider Spray Offers Way to Kill Spiders Safe, My Cleaning Products Releases Samples of It to Prove Its Advantages

My Cleaning Products introduced a new spider spray to kill spiders effective and safe. It also offered samples of it to prove its benefits. 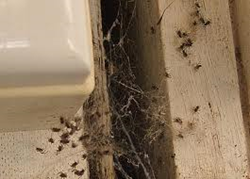 But though gentle on health, My Cleaning Products assured that the spray is tough on the eight-legged pests. It said that it just takes seconds for it to kill spiders.

Spiders are some of the most-common indoor pests. And to get rid of them safe, a new spider spray offered its help. My Cleaning Products, its manufacturer, also released some samples of it to prove its advantages over the other pesticides specifically made for those arachnids.

That new spider spray is particularly the Spider Bully. It is one of My Cleaning Products' pest-control solutions under the Green Bean Line.

Green Bean Line particularly uses organic ingredients. And so, MCP pointed out that Spider Bully is organic-based and, therefore, safe.

Unlike the majority of pesticides, the company cited that Spider Bully, along with the other products in the Green Bean Line, contains no harsh chemical ingredients. That, it elaborated, means it leaves no elements that could threaten health whenever sprayed. In fact, it detailed that it is even on EPA's FIFRA 25(b) list for being pesticide-exempt.

But though gentle on health, My Cleaning Products assured that the spray is tough on the eight-legged pests. It said that it just takes seconds for it to kill spiders.

What's more, it added, is that it works not just on the adults of those species. It stated that it is also effective even on their young and eggs.

Moreover, MCP cited that as a spray solution, it also makes much easier and faster for anyone to complete the spider elimination process. All a person needs to do, it stated, is to get it ready and spray it directly on the pests.

Given all those advantages, the company believed that Spider Bully is truly the best help anyone could get to effectively and safely eliminate spiders. To prove that, it announced that it would be giving out samples of it so anyone could personally experience the benefits it could it bring. And as it shared those Spider Bully Complimentary Samples are available at mycleaningproducts.com.