The HBO "Entourage" star has partnered with a new iOS app to give one contest winner the opportunity of a lifetime: to perform live hip hop at the South by Southwest (SXSW) music festival. 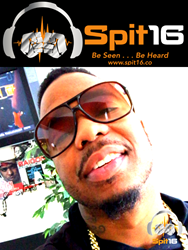 The Spit16 app and the people who created it are passionate about giving artists a unique stage to show their talent, So I figured, who better to team up with to give someone one of the biggest stages in music?

You've probably had the dream at one time or another; standing on stage, in front of thousands of fans, the spotlight on you and only you, so you can show the world your talent. For millions of musicians and artists, this scenario remains only a dream that they are never able to achieve. This year, thanks to rapper and "Entourage" star Saigon and new mobile app Spit16, that dream will become a reality for one person at this year's South by Southwest music festival in Austin, Texas.

From March 16th until March 18th, anyone who will already be in the Austin area for SXSW can download the Spit16 app for free on the iOS App Store and post his/her best verse. The post that receives the most likes, or "flames" in Spit16 terms, will win and the artist who made the post will get to open for Saigon live, on stage, on March 19th during the South by Southwest music festival. Anyone entering the contest must already be in Austin on March 19th, as Saigon and Spit16 will not be able to provide travel arrangements on such short notice.

Saigon is a hip hop artist born and bred in New York City. He played himself in a recurring role in the HBO hit series "Entourage" and is scheduled to appear in the feature film based on the series that opens in theaters June 5th. Saigon knows all too well the challenges of trying to make it in the music industry. "When I was coming up, I learned really fast that you have to make your own luck in this game, because not too many people come along and just give you an opportunity. You have to work and fight for anything you want."

When Saigon was asked to perform at SXSW 2015, he saw an opportunity and immediately contacted his friends over at Spit16 with an idea. "The Spit16 app and the people who created it are passionate about giving artists a unique stage to show their talent," Saigon explained." So I figured, who better to team up with to give someone one of the biggest stages in music?"

Spit16 is a hip hop social media platform that just launched on March 16th for iOS. The app allows each user to create an original video up to 1 full minute long, using dozens of audio and visual features. That user can then post the video so a community of hip hop enthusiasts can like or, drop a "flame" on the video and comment on it. Each user can also save the video once it's made to share on other social media platforms. The combination of organic hip hop and social networking has not been seen elsewhere and it's what drew Saigon to the app while it was still in beta. "It's like Instagram for MC's, only better" said the Brooklyn-born rapper.

Pursuing a dream isn't easy and realizing that dream is even harder. Thanks to Saigon and Spit16, the opportunity of a lifetime, to perform at one of the world's largest music festivals, is only one download away.