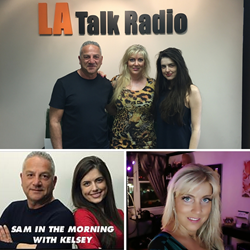 I started my business several years ago and saw a need to teach this trade because there was nobody out there teaching it hands-on.

Renowned airbrush tanning expert Simone Emmons was invited by LA Talk Radio to attend their popular talk show ‘Sam in the Morning with Kelsey’ as the guest. During the show broadcast, Simone spoke in detail about her Los Angeles based airbrush tanning business and the spray tanning training academy. It is relevant to mention here that Simone Emmons has been one of the pioneers in promoting the concept of sunless tanning in America. In her professional spray tanning career, Simone has spray tanned many models and celebrities from different fields. Simone is also the proud owner of the Hollywood Airbrush Tanning Academy, a highly recommended hands-on training school for the aspiring spray tanning professionals.

Born in Berlin, the capital of the former West Germany, Simone migrated to America at the tender age of twenty. During the talk show on LA Talk Radio, Simone briefly discussed the challenges she faced in adjusting to a new society with a diverse culture. A large part of the discussion, however, was related to Simone’s work. She also discussed how the addiction to tanning beds can cause serious skin problems. Finally, Simone explained the basics of airbrush tanning and how she got interested in this healthier alternative to traditional tanning.

Highlighting the lack of training facilities when she started her business, Simone said, “I started my business several years ago and saw a need to teach this trade because there was nobody out there teaching it hands-on. I taught myself, and it took me a few years to really become great with the spray gun and developing my flawless technique. The reason why it took me a while is because there was no training available.”

Today, Simone’s Hollywood Airbrush Tanning Academy offers hands-on airbrush tanning training along with necessary entrepreneurial support to help her students become independent spray tanning professionals. She has trained over 300 entrepreneurs from 27 states (and counting) including international students from Trinidad, South Korea, Kuwait and Canada. As a result of Simone’s advanced training, most of her students are well settled in America’s growing market for spray tanning.

Simone’s entire interview in LA Talk Radio is available at the following link:

As a gesture of courtesy, Simone plans to set up a follow-up interview within a few weeks and invite the radio host Sam and Kelsey to get an airbrush tan from her.

Individuals interested in learning spray tanning can visit the HollywoodAirbrushTanningAcademy.com to sign up for the next spray tanning class or call Hollywood Airbrush Tanning Academy at (818) 674-9621 for more information.

LA Talk Radio launched in the year of 2008 and is the hottest Internet talk radio station delivering quality programming through live streaming and on-demand archives commercial-free 24/7. The station now broadcasts over 80 shows for every taste and interest including a new HD Video Channel, streamed live and on-demand.