The mDeck app allows users to perform card tricks like the pros, making years of training optional. The mDeck inventor, card magician Steffan Soule, put his card magic into an app during covid because he could no longer present live, close-up magic shows during the pandemic. Now everyone who wants to perform great card magic can access previously inaccessible powers from the ingenuity within the secret code of the mDeck app. 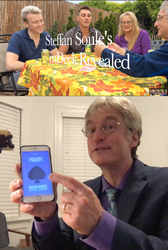 New invention uses an app and a deck of cards to produce great card magic. The mDeck system offers users a shortcut to the memorized deck, Any Card At Any Number and other astonishing routines with cards.

Close-up magic became popular in the 1960's when Dai Vernon invented and performed his Poker Demonstration which became a modern classic. The Mnemonica system by Juan Tamariz influenced the inner world of card magic in the ‘90s. Now, with Steffan Soule's mDeck, these expert level card systems and other great effects are accessible through an app that uses a real deck of cards. These effects can be performed even with the app on a borrowed device, and even with a borrowed deck of cards!

Close-up magic is hard to find. Live shows are for real people and close-up magic practically requires sharing respiratory droplets, so close-up magic has become more rare even than stage magic during this pandemic. Fortunately, the mDeck app plays from the stage or on screen, so it is close-up magic that works for audiences at a distance.

The mDeck system requires study, but it provides a shortcut, and it helps people develop capacities beyond card magic. Working with these complex patterns using cards along with rehearsing the-seemingly-impossible-right-before-their-eyes, leads card magic students toward insight and understanding while developing multiple human capacities. Cards are used for memorization work, pattern recognition, dexterity, and for 'close-up card magic'. This is more than magic; it is also a tool for developing memory and attention.

With the mDeck, users can follow the thinking patterns of multiple card experts, highly regarded thinkers and inventors in the field of magic. Memorizing a deck of cards is good for the mind, and with the mDeck app, users see the results of having that skill before doing the initial work of actually memorizing a deck. Mind reading, Any Card At Any Number and other exclusive magic routines with playing cards are easy to master with this free app invented by a professional card magician.

Picture this: a magic fan can download the mDeck app and get a regular deck of cards set up in the mDeck style which is a secret for free at http://steffansoule.com/mdeck Then the magic fan must practice and rehearse. One can do that by keeping the deck and app together and revisiting them from time to time for a few minutes here or there, whenever one feels like holding and fanning through a deck of real playing cards (instead of machines and devices).

Once a card magic student knows how to present the free effect that comes with the app, he simply shows someone a deck of genuine cards; he mixes them up and cuts them; he offers a free selection of any card; the card that his spectator selects and holds with only its back showing is revealed on the device. The card image on the device matches the face of the selected card! Every time. Any card the spectator selects from the mDeck can be determined in seconds by the app and it displays on the screen. This one mind-reading effect is one of the main reasons professional magicians spend time learning this system... because of how deeply it astounds audiences. Now, instead of memorization, the app makes this and other expert level effects easy to achieve.

Beyond this one, first effect, magicians can learn the routines with the mDeck Stack covered in the booklet called "Further Poker" by Steffan Soule. The app is free and the book may be at the library, so this is an inexpensive and great way to dig into card magic with an amazingly ingenious shortcut, the mDeck system. Not only can the uninitiated now learn magic, but also, with this app one can explore pattern recognition, hand/eye coordination and memory. This is all before unlocking the incredible effects for purchase within the app.

The cleanest versions of Any Card At Any Number require the magician to perform complicated mental math on the spot. The mDeck app secretly does the math for the magician. It's disguised as a fun, interactive visual aid for the spectator that illustrates what they are seeing with the physical deck of cards. And with the mDeck, magicians may perform many other effects including Further Than Further Than That AND Vernon's Poker Demonstration immediately following Any Card At Any Number (acaan). This happens without a deck switch or reset. Other stacks can be used in the mDeck app including Si Stebbins and Mnemonica by Tamariz.

The mDeck app relates 52 real, touchable cards with a digital device. It combines the physical world with the digital world. By practicing this art with this app, students experience working simultaneously with thinking, feeling and moving patterns. This combination is used in training for the purpose of enhancing presentations, but also for enhancing brain development. This develops concentration, the capacity to keep attention for longer durations within one's mind and one’s feelings. Training with the mDeck helps the mind become responsive and reliable as an instrument of memory and insight. People use the mDeck as a fun thing to do, like playing solitaire, or as a way to demonstrate the skills of a mind-reader or a card-shark. Classic routines and inner secrets of card magic are now built into an app for anyone sporting a device and a deck of cards. The way magicians present card magic is changing with the advent of the mDeck.