STING crowned King of Toronto's Restaurant Row. Sting also reflects on how his "Last Ship" play and the General Motors saga in Oshawa are eerily similar.

Over the past six weeks KING Street has become STING Street. Toronto has been Stung by Sting, and vice versa. "I love Toronto," he told patrons at the Kit Kat Bar & Grill. "I 'm very grateful for how much people have embraced the show." (The Last Ship) 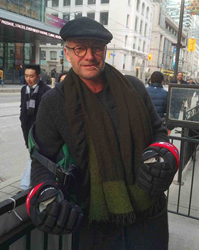 "I love Toronto" Sting told patrons at the Kit Kat Bar & Grill. "I'm very grateful how much people have embraced the show."

You know there’s something special about a restaurant when, at any minute, an A-list star could cruise in for a plate of Angelhair Basilico, Osso Buco Milanese or World famous penne and sausage. That’s how it is at the Kit Kat Italian Bar and Grill. This laid back fine dining destination that has been the buzz of international entertainment celebrities and local in-the-knows for 30 years. The Kit Kat is the type of place where every diner is made to feel like a Star.

Named one of the top 10 restaurants around the iconic CN Tower, this globally-renowned eatery is one of the original and most popular on “Restaurant Row”, the bustling vibrant strip in the Toronto entertainment district that lines King Street West. Along with visiting and local entertainment music, movie and TV stars, Kit Kat is within walking distance for theatre-goers on their way to and from Princess of Wales Theatre, Royal Alexandra Theatre and TIFF Lightbox. Sports fans taking in a game at Rogers Centre, concert fans on a night out at Roy Thompson Hall or Air Canada Centre. The lunchtime crowd from the financial district, families exploring Ripley’s Aquarium to those attending the Metro Toronto Convention Center as well as many other major attractions, including A-list downtown hotels.

According to Joe Warmington of the Toronto Sun, over the last six weeks, King Street has become Sting Street. Toronto has been stung by Sting. And vice versa. "I love Toronto,” he told patrons at Kit Kat Italian Bar and Grill Thursday. “I’m very grateful for how much people have embraced the show.” The Last Ship, chronicling the end of the ship-building era in his hometown of Newcastle, England, has been a blockbuster in Toronto, where audiences have packed the Princess of Wales Theatre on King St. West. And yes, that was Sting behind the Kit Kat's actual bar. “He went back there for a minute and teased people and asked what they would like,” said John Carbone of Kit Kat. It was a light-hearted moment of fun for the legendary leader of The Police.

Kit Kat, and other establishments along Restaurant Row, including Kinoya Sushi Bar, have become Sting’s home away from home. “They have adopted me,” Sting told customers.
“Sting has adopted us,” said Carbone, who, along with his famous brother Al, has said it was a pat on the back they really needed.

As debate rages over the King Street Transit Pilot Project, one fact not under scrutiny is what The Last Ship has done for business. “It has really helped us because there has been such an audience from around the world for that great show,” said John. “Its final show is Sunday and I can tell you we will miss it and Sting too. He is such a good, generous man.” Sting didn’t weigh in on the controversy directly, but instead patronized the restaurants with a view to helping them at a time when they are struggling — much like the theme of his show and how business wound down in Newcastle, creating unemployment. “Sting has a big heart,” said John. “He really cares about working people.”

Sting left the same mark on the Unifor autoworkers in Oshawa.
“Sting is the real deal,” said Unifor National President Jerry Dias. “He is the whole package.”

Sting to GM regarding Oshawa plant closure: “You can’t just walk away.”
Sting details the personal story behind ‘The Last Ship’
LILLEY: Taking the Sting out for auto workers
Stings message

Not only did he perform at Tribute Communities Centre for autoworkers who have been told their jobs will be eliminated at the end of 2019, he has also stayed in touch with them. “He has become our friend,” said Dias. “He really cares about the hard workers in Oshawa.”

When Kit Kat staged a road hockey protest to illustrate the ghost town effect of no traffic being allowed, Sting supported them by donning, and later signing, a pair of hockey gloves. “He does everything with such grace and such class,” said John. “But for a guy in such great shape he sure can crush the food. He loves everything on our menu.”

Needless to say, on this street, for many years to come Sting will be King! (Warmington)

The Kit Kat has a Sardi’s of New York vibe, filled with bric-a-brac from all over the world and walls of signed celebrity photographs -- and a wishing tree called the “tree of heaven” (Ailanthus Altissima) grows in the middle of the kitchen and up three floors through the roof. The Carbone brothers, along with Albert’s wife and partner Cathy and son Max, say many wishes have come true under this tree and the restaurant has photos to prove it -- from Brendan Shanahan celebrating with the Stanley Cup to Joe Tory and Derek Jeter of the New York Yankees and the World Series to two big-purse lottery winners from Niagara Falls.

Kit Kat owes its reputation to larger-than-life Niagara-born and Calabrian decent brothers Albert and John Carbone, whose signature Southern Italian dishes have awakened the palates of generations of Torontonians and visitors to the city for 30 years. From their sumptuous and hearty Osso Buco Milanese that’s the favorite of Steven Van Zandt and the sinful Angelhair Basilico that Shania Twain always orders to Pink’s Mussels Arrabiata and Albert Carbone’s off-the-charts Penne with Spicy Italian Sausage that Steve (Bobby Baccala) Schirripa loved. The Kit Kat is one of the few Toronto Italian restaurants to customize your dishes any way you want, whether it’s vegetarian or gluten-free. Deepack Chopra relishes in Kit Kat’s famous Indo-Italian coconut curried chickpeas and vegetable medley, Donald Sutherland always opts for a Black Bean Soup and 14oz Provimi Veal Chop and Keith Richards chooses a different pasta every time he comes in.

Music legends from The Rolling Stones to Bruce Springsteen and Jay Z -- and even Larry the Cable Guy have had had Kit Kat cater them when they’re in Toronto performing. Other celebrities that drop by the Kit Kat are Billy Crystal and Steve Nash (they’re both into the Roast Lemon Chicken), Ron Howard, Howie Mandel, Marilyn Manson, Paul Simon, Sting, Duchess of York Sara Ferguson and even theatre royalty Andrew Lloyd Weber, Joan Plowright, Cameron Macintosh have often been spotted at the eatery when they’re in town.