Stradalli Cycle joined a host of cycling superstars including Greg LeMond, Tom Danielson and Grant Potter at JetBlue Park in Fort Myers, Florida for a charity bike ride to raise money for the Boys & Girls Clubs of Lee County. 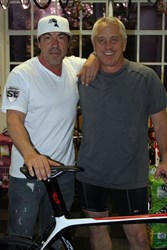 Team Stradalli was there to help the kids and to help with the charity.

Stradalli Cycle, the affordable high performance carbon bicycle manufacturer, is pleased to announce that it took part in the Everyone Rides charity bicycle ride in support of the Boys & Girls Clubs of Lee County. The charity event was attended by a host of cycling legends including three times winner of the Tour de France Greg LeMond.

The event, which was designed to be fun for all the family, included routes of 15, 30, 62 and 100 miles. The riders on the 62 and 100 mile routes were escorted by guest professional cyclists including Frankie Andreu, Isaac Howe, Brad Huff, Tom Van Asbroeck and Phil Gaimon.

“Team Stradalli was there to help the kids and to help with the charity,” said Thomas Steinbacher, CEO of the Stradalli Cycle Company. “We all enjoyed the windy ride and we all done it with a big smile and an open heart for the charity.”

Greg LeMond rode a Stradalli Como during the event and he commented that it was an “amazing and super stiff bike.” As well as becoming World Champion in 1983 and 1989, LeMond is the first non-European professional cyclist to win the Tour de France.