Dr. Bostani’s Advanced Dental comments on a recent article suggesting that modern humans should take a hint from ancient humans and adopt diets lower on sugars and acids. 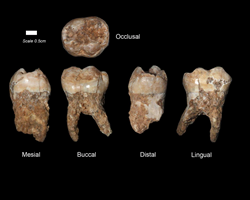 We have much to learn from fossilized human and pre-human teeth.

Teeth are for more than chewing and smiling

A May 15 article on Science News discusses new evidence of the genealogical separation between what we know as modern humans and Neanderthals occurring much earlier than previously thought. Until recently, the general consensus was that Neanderthals and modern humans had a common ancestor that existed between 800,000 and 1.2 million years ago. However, this new study suggests that the ancestor might have existed as early as 3.2 million years ago. The study found this conclusion by analyzing differences in ancient Neanderthal and human teeth and comparing them to projected rates of evolutionary progression. Burbank-based dental clinic Dr. Bostani’s Advanced Dental says that the study underlines the reality that teeth are for more than chewing and smiling.

The dental clinic notes that if ancient humans and Neanderthals had not protected their teeth enough modern scientists might not have enough teeth to work with to make such conclusions. Dr. Bostani’s Advanced Dental notes that, while toothpaste with fluoride was still thousands of years off, what likely protected ancient humans’ teeth was the lack of excess sugars and acids in their diets – something that modern humans should consider. The clinic points to research on the markedly-less ancient residents of the city of Pompeii, who had near flawless teeth because of their lack of a sugary diet, even if it proved that hot lava and earthquakes present health challenges more immediate than tooth decay and diabetes.

Dr. Bostani’s Advanced Dental explains that sugars in the diet essentially allow for an extreme buildup of acid-producing bacteria in the mouth. This does two things, one) the resulting acid increase strips teeth of their enamel and two) allows for a buildup of tartar that sticks to the teeth, causing stains and inviting tooth decay if not removed during a cleaning. The clinic says that there are worse consequences than stained teeth and tartar buildup: gum disease, tooth decay, and even tooth loss are possible outcomes of excessively sugary diets unchecked by proper dental hygiene habits.

Effective dental hygiene comprised of regular brushing and flossing can reduce the risk associated with sugary diets, but twice yearly dental visits are also musts, says Dr. Bostani Advanced Dental. At a minimum, individuals should visit their dentist routinely for checkups and cleanings to arrest dental issues long before they can become more serious. In doing so, the dental center adds, patients can rest assured knowing that their oral hygiene is up to standard and their smiles will remain healthy and bright.

Readers in the Burbank and Los Angeles area can learn more about maintaining their dental health, particularly if they are unwilling to give up their sugary luxuries, by visiting Dr. Bostani’s Advanced Dental at https://www.drbostani.com/. Alternatively, the clinic can be reached via phone by calling (818) 973-7100.