David Howe, SubscriberWise founder and America's Cable Credit Manager, will present 'Knowledge is Power: Analytics and Predictive Sciences Deliver Incredible Results for Operators Across the Nation' at the 2016 IP Vision Conference and Expo. 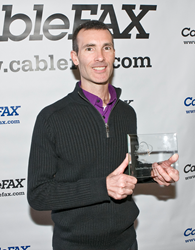 SubscriberWise®, the nation's largest issuing consumer reporting agency for the communications industry and the leading provider of business rules and scoring technology in telecommunications, announced today that the company founder and CEO will speak at the 2016 Rural Broadband Association and National Rural Telecommunications Cooperative IP Vision Conference & Expo. This unique event will be held at the Tropicana Las Vegas Hotel, April 6th - April 8th, and will focus on the evolution of broadband networks in rural areas and the IP applications that run on them.

"For ten years now, the leading operators across this nation have relied on the power of SubscriberWise to help grow their subscriber base, generate cash-flow, create operational efficiencies, and improve the customer experience dramatically. Yes, I'm very excited and genuinely looking forward to the opportunity to share our award-winning technology to the industry professionals attending the IP Vision event. I fully anticipate a productive, engaged, and highly informed discussion," Howe concluded.

SubscriberWise® launched as the first U.S. issuing consumer reporting agency exclusively for the cable industry in 2006. In 2009, SubscriberWise and TransUnion announced a joint marketing agreement for the benefit of America's independent cable operators. Today SubscriberWise is a risk management preferred-solutions provider for the National Cable Television Cooperative.

SubscriberWise contributions to the communications industry are quantified in the billions of dollars annually.

David Howe is founder, president, and majority share-holder of SubscriberWise. He is also a consultant and credit manager for MCTV. At MCTV, Howe manages the bad debt and equipment losses on annual sales in excess of $60 million. During his 19-year career at MCTV, Howe has reviewed more than 50,000 credit submissions. His interest in credit began in 1986 while a 17-year-old student in high school.

Having directly prevented multitudes more child identity thefts than any single individual including law enforcement professionals nationwide, Howe is recognized as one of the most productive and engaged child identity theft experts of the 21st century. Howe’s expertise on the subject of identity theft has been shared with virtually all levels of state and federal law enforcement agencies including field agents from the FBI. In 2014, Howe was contacted by IBM’s RedCell Counter Fraud and Financial Crimes Intelligence organization for training and information concerning child identity fraud. Today Howe is using the resources of SubscriberWise to help protect children from identity theft and exploitation across the nation.

David Howe is the highest FICO achiever in worldwide banking and financial history. Howe is the only known individual – living or deceased – to have obtained simultaneous perfect FICO 850 Scores across every national credit bureau (since William Fair and Earl Isaac formed Fair & Isaac Corporation (FICO) 60 years ago). In 2014, Howe achieved simultaneous perfect Vantage Scores at Equifax, Experian, and TransUnion, a credit-scoring feat never before demonstrated.

Howe produced and published two videos on the subject of perfect credit: FICO 850 Credit Report Facts and FICO Scores: The Facts. The first general-purpose FICO scores were debuted a quarter century ago.

Over the past decade, Howe has been consulted by every leading communications operator in the country including Sprint, Time Warner, Mediacom, Metrocast, Atlantic Broadband, Armstrong, Antietam, Comporium, Grande, Cincinnati Bell, Cable ONE, Shentel, BendBroadband, NewWave Communications, USA Communications, Packerland Broadband, GTA Telegaum, and far too many others to include here.

Howe holds an Associate and Bachelor of Arts degree from the College of Arts and Sciences at Kent State University with an academic focus in human behavior at the macro level, political science, and public administration. He is a member of Pi Gamma Mu, the country's oldest and preeminent honor society in the social sciences and Alpha Kappa Delta, the international sociology honor society.

Churn and the frequency of multiple service by SW Level.pdf