David Howe, SubscriberWise founder and the global highest FICO achiever in the history of banking and finance, makes pilgrimage to Pulse nightclub to pay respect to the mass shooting victims and their families. The chief executive personally processed the $1000.00 donation following OneOrlando's contact today. 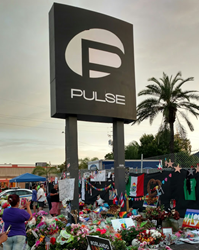 The LGBTQ community and their families are a people who have long reflected the very best of what humanity could hope to become. - David E Howe, SubscriberWise CEO

SubscriberWise, the nation’s largest issuing consumer reporting agency for the communications industry and the leading advocate for children victimized by identity fraud, announced that the company has today donated an additional $1000.00 for the victims and families impacted by the tragic shooting at the Orlando Pulse nightclub which killed 49 and injured 53 innocent people. Last month SubscriberWise donated $2500 to OneOrlando for the victims and their families (http://www.prweb.com/releases/SubscriberWise/LGBTQ_Orlando/prweb13490751.htm) and as a show of solidarity for all humanity oppressed by hate and ignorance.

The despicable crime was largely perpetuated against Orlando's LGBTQ community - one of the most loving, intellectual, thoughtful, creative, and extraordinarily diverse populations humanity has ever known.

"Two weeks ago I traveled to Orlando and Pulse nightclub to honor and respect the memory of my sisters and brothers who were senselessly murdered at the Pulse nightclub. The experience was surreal and it moved me profoundly," stated David Howe, SubscriberWise founder and CEO. "Before this tragedy, I had the pleasure of going to the Pulse nightclub as a patron on at least two occasions over the past few years.

"I will never forget the love and kindness of the employees and patrons of Pulse," continued Howe. "It was an easy and proud decision for SubscriberWise to offer additional financial support. The LGBTQ community and their families are a people who have long reflected the very best of what humanity could hope to become. Today SubscriberWise honors their memory while trying hard to imitate their courage and compassion."

Hearing the facts about credit scores from the only citizen of the world - living or deceased - to have achieved simultaneous perfect FICO 850 scores across every national repository and simultaneous perfect Vantage scores at Equifax, Experian, and TransUnion - as well as having obtained rankings in the 100th percentile across virtually every scoring model on the market – is intended to empower and encourage consumers who may be struggling with their credit and eager to get back on their feet.

Pursuing perfect credit is hardly the point and it shouldn't become an obsession; rather it is the fact that it's possible. It requires patience and extremely careful financial maneuvers over a very long period. And because no person can control life events, set-backs are inevitable. David Howe proves it's attainable despite his own challenges and life events during his near half-century existence on planet earth. Howe has literally invested decades with countless hours and thousands of dollars pursuing and mastering personal credit and FICO scores in particular. The effort has paid off and has not gone unnoticed.

David Howe coined the term "community-made millionaire" (while dismissing any notion of "self-made") and uses this to describe himself and his corporate and financial successes. It may be perceived by some as arrogant, but its purpose is to motivate anyone who is reaching for their goal(s)...whatever those goal(s) may be. Howe makes it a point to admonish any person who would sell another short for pursuing their personal goals and ambitions.

Howe's passion with credit and risk management can be found everywhere in the industry today. Today SubscriberWise touches a U.S. consumer every minute of every hour of every day. In 2014, SubscriberWise was named winner in the CableFAX Tech Awards in the category of commercial software, among an incredibly competitive environment that was open to every MSO and tech vendor in North America.

SubscriberWise contributions to the communications industry are today quantified in the billions of dollars annually.