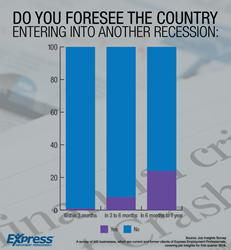 "When you look at the big picture, the American economy will begin 2019 on a strong footing. Even with such low unemployment, we have an abundance of jobs to fill, and wages have been on the rise." Bill Stoller, Express CEO

At year end, businesses have confidence in the economy, with most predicting no recession in 2019.

In the December survey of 445 businesses, only 1 percent of respondents expect a recession in the next three months, while 8 percent expect one in three to six months.

Less than one-quarter (24 percent) believe a recession will arrive in the second half of the year.

While media predictions of a recession have increased in recent months, signs of a strong economy abound:

“The outlook is very similar to what we expected in 2018,” she said. “Growth and demand continue to remain strong. There is a significant amount of ‘talk’ around a recession or adjustment, but this mostly seems media driven as opposed to hard facts and actual experts within individual industries. Most clients see their own industry remaining strong. There may be some slowdown in the automotive sector, but this will be more of the industry returning to normal as opposed to receding.”

Over in Illinois, Terri Greeno, an Express franchise owner in Crystal Lake, notes that “2018 felt hotter” but that she still sees a “steady, slight uptick after the first quarter.”

“I know some people are uneasy at the end of 2018,” said Bill Stoller, CEO of Express. “But when you look at the big picture, the American economy will begin 2019 on a strong footing. Even with such low unemployment, we have an abundance of jobs to fill, and wages have been on the rise. Clearly there are concerns about what may happen toward the end of 2019, and there are always external forces beyond our control. For now, though, I’m predicting a happy economic new year.”

The survey of 445 businesses, which are current and former clients of Express Employment Professionals, was conducted in December 2018 to gauge respondents' expectations for 2019.