UOSSM Condemns The Attack on a Field Hospital in Northwestern Syria, Urges For Immediate International Protection of Healthcare Facilities.

The Union of Syrian Medical Relief Organizations strongly condemns the attack on field hospital in Northwestern Syria, calling for immediate implementation of an action plan to protect the medical and healthcare facilities in the time of war. 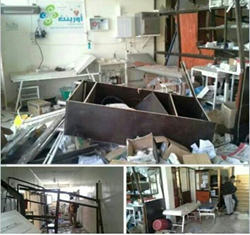 Car explosion in field hospital in Northerwest of Syria

The Union of Syrian Medical Relief Organizations strongly condemns the attack on field hospital in Northwestern Syria, calling for immediate implementation of an action plan to protect the medical and healthcare facilities in the time of war.

According to the ABC news, in a report issued on February 23rd- 2014, and titled “Bomb Hits Syria Field Hospital Near Turkish Border." Ambulances raced from Turkey to retrieve the dead and wounded from the blast that occurred in the rebel-held northwestern Syrian town of Atmeh near the border with Turkey, after a car bomb exploded near a charity field hospital in northwestern Syria on Sunday, wounding mostly medics and patients, said activists and Turkish media. The report said that “There were at least 11 wounded, including a five-month-old baby, who was rushed to Turkey, said Syrian activists of the Idlib News group.”
http://abcnews.go.com/International/wireStory/syrian-kurds-capture-town-islamic-fighters-22631039

“We are shocked by this heinous act, where car exploded in field hospital in Northern Syria, resulted in loss of lives. Targeting healthcare system in the time of war, when hospitals are overwhelmed with wounded and casualties, is rather repugnant. ” Dr Tawfik Chamaa, the spokesperson in UOSSM, said, “ Given the complexity of the medical situation in Syria, and the extremely difficult conditions associated with establishment of hospital and healthcare centers, we call on international community and the UN to immediately adopt the necessary actions to protect the medical facilities serving Syrians inside Syria and in the refugee camps.”

UOSSM reiterates the joint statement of UN Emergency Relief Coordinator Valerie Amos, Director-General of the UN World Health Organization (WHO) Margaret Chan, and Executive Director of the UN Children's Agency (UNICEF) Anthony Lake, that was issued on Dec 7th, 2013 “It is of the interest of both parties in the conflict and of all Syrian people to preserve the neutrality and the functionality of health infrastructure, At a time when hospitals are overwhelmed with patients, it is vital that these facilities be protected and medical staff be allowed to provide urgent medical, surgical and obstetric care to patients without any risk,” http://www.un.org/apps/news/story.asp/realfile/html/story.asp?NewsID=46683&Cr=Syria&Cr1=#.UwnxY4VqPIU