UOSSM is extremely shocked by the images of the "Napalm-like attack" reported by NBC News, in which Dr Rula described the scene, “As they all started to arrive, it felt like I was living a horror film." 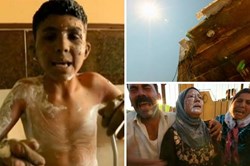 "Apocalyptic." This is how a humanitarian doctor who treated the children after the Monday, August 26th, 2013 incident described the scene, as reported by NBC News on August 30th, 2013.

In the NBC report, Dr Rula described the scene, “As they all started to arrive, it felt like I was living a horror film." She was not sure of the substance being used, "We didn't actually have much information at the beginning. All we knew was that these severely burnt children were all coming in droves. Those who survived have burns on 50 percent to 80 percent of their bodies.”

Dr Tawfik Chamaa, UOSSM spokesperson said, “Horrific acts have been committed on civilians in Syria throughout the last 2.5 years, by conventional and non-conventional weapons. The last attack on school kids was one of them. While we are not completely sure what is the substance that had been used in the attack, we know for sure that there were 10 kids lost their lives and dozens more injured and burned because of the attack.”

Addressing the importance of acting fast to provide medical supplies and medicines inside Syria, Dr Chamaa said, “We are facing an unprecedented large scale medical crisis in Syria. With a Napalm-like attack, our medical teams are struggling to provide resuscitation, appropriate management of burned patients, and necessary medicines and medical support. It is imperative that the international health organizations act fast and extend their immediate physical and medical help to people inside Syria. Syria’s Health system is annihilated, the medical resource supplies are exhausted, and the need is beyond the Syrian peoples' capability. We urge the WHO, ICRC, and all medical organizations to support our effort in providing the medical supplies inside Syria.”