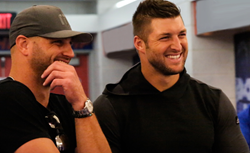 Heisman Trophy winner, national champion and NFL veteran, and professional baseball player Tim Tebow can now add “filmmaker” to his impressive list of accomplishments. Tebow and his brother Robby are executive producers of the new film RUN THE RACE, telling the inspiring, fictional story of two high school athlete brothers who see their relationship tested as they seek different paths out of their troubled lives.

"RUN THE RACE is about so much more than football. This is a story about overcoming the hard issues of life, about the power of sacrifice, the power of family, and the power of forgiveness,” Tim Tebow said. “ I love being a part of a project like this because it will impact lives, inspire hope, and even prompt action. When I read the script, I knew this was an important project to get behind.”

“The script pulled me in right away, and I wanted to bring it to life cinematically,” Robby Tebow said. “As somebody with brothers in a big, super-close family that has gone through a lot together, it resonated with me on a deep level.”

“RUN THE RACE is about two young brothers facing unbelievable odds with an unbreakable bond,” said creator Jake McEntire, who co-wrote the script,. “I believe audiences will resonate with this uplifting story of faith, sacrifice and hope.”

Synopsis
In RUN THE RACE, two desperate brothers sacrifice today for a better tomorrow.
Reeling from his mother’s death and his father’s abandonment, Zach, an All-State athlete, finds glory on the football field, working to earn a college scholarship and the brothers’ ticket out of town.

When a devastating injury puts Zach—and his dreams—on the sidelines, David laces up his track cleats to salvage their future and points Zach toward hope.

RUN THE RACE shows what’s possible when you run to—instead of from—the love of God.
NFL legend Eddie George (THE BEST MAN) appears as a college recruiter. He found that the movie’s background of athletics created the perfect context for a story about the brothers’ struggles and relationship.

"We set out to make a film that engages the YA crowd while retaining a universal, timeless appeal,”. said director Chris Dowling (WHERE HOPE GROWS). “Young adults crave stories built on authenticity and we deliver with real characters having real conversations about love, family and trying to find his or her place in this sometimes crazy world.”

“Everyone involved with RUN THE RACE can’t wait to get this feature film in theaters,” said Producer Darren Moorman. “I want everyone to experience this authentic movie that tackles relevant themes in an entertaining way, where the romance is whimsical, the struggles are real, but the story-telling is fresh and poignant.”

“RUN THE RACE is in its final stage of post-production,” Reeves said, “Theatrical distribution and release date will be announced soon.”

About Reserve Entertainment
Reserve Entertainment acquires, develops and produces high-quality, strategically-budgeted feature films and TV for studios like Paramount Pictures (SAME KIND OF DIFFERENT AS ME), Lionsgate (Mark Hamill’s Pop Culture Quest) and Provident Films (INDIVISIBLE). Reserve Entertainment believes the best cinematic stories, which consistently appeal to broad and loyal audiences, not only entertain but build up and celebrate the human spirit. For more information, go to http://reserveentertainment.com