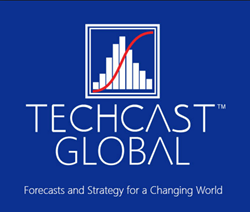 The exact same thing is happening that has always happened—we’re evolving, and jobs are changing.

A pathbreaking new study released last week from TechCast Global, Inc. (TCG) titled, "AI and Future jobs in 2030” estimates that roughly 20 percent of all jobs will be lost to machines by 2030. But instead of the “doom and gloom” scenario of massive unemployment that some forecasters anticipate, the study’s authors say civilization will "muddle through" and replace jobs lost to automation with new fields of "creative" work—leadership, innovation, entrepreneurship, etc.— that will keep unemployment at tolerable levels while forming a more creative, intelligent society.

TechCast Global, a technology, social trends and wild card forecasting and consulting collective for business and government, released the study results last week, which predict the likely distribution of jobs as artificial intelligence (AI) automates routine work. The study also finds that a combination of creative business and governmental programs can help alleviate job losses and even form a more creative, well-informed society.

According to the study, advanced AI systems are already being introduced. IBM’s Watson Division is partnering with hundreds of companies to automate entire fields of work. A partnership with Cleveland Clinic is developing a medical diagnosis system that promises accuracy surpassing all but the best doctors, and another partnership promises to automate legal work. Google’s Deep Mind, a “deep learning” system that needs no training as it learns by itself, recently beat a human master at Go much faster than anticipated by AI researchers, and taught itself to recognize speech.

With technology this sophisticated, the decades-old warnings that “robots are coming to take your jobs” have finally reached the point of no return.

But study authors William Halal, Jonathan Kolber, and Owen Davies say that while their findings confirm that intelligent machines and virtual assistants are likely to take over routine service and knowledge tasks, AI technology will remain limited and real people will always be needed to provide human contact and handle tough issues. The study also concludes that new forms of creative work are likely to comprise about 11 percent of all jobs by 2030, and governments are likely to provide about 10 percent of citizens with guaranteed minimum incomes.

According to Halal, the 20 percent job loss forecast in the study shouldn’t set off any alarms as it’s a fairly well-know figure already. In addition, AI is expected to pave the way for new opportunities that could be a blessing in disguise for workers who will be uprooted by technology.

“Some of my fellow optimists worry about the people being left behind,” Rob Nail, CEO of Singularity University in Silcon Valley told WSJ Technology columnist Christopher Mims. “The exact same thing is happening that has always happened—we’re evolving, and jobs are changing.

“The one major difference, however is that the time of change is compressing because the pace of technology is moving exponentially.”

In the end, rather than diminishing people, the study suggests that the net effect of AI may be to enhance the value of higher-order talents that are a unique gift of humanity, which may seem contrary to many who are convinced that disaster looms ahead. Instead, Halal, Kolber and Davies suggest that more creative work and better support can also foster a more innovative, prosperous, and thoughtful civilization.

The only current debate is about how deep and how fast intelligent machines will automate jobs, and whether the same technological forces will generate enough new work. The study addresses the looming issue of unemployment by forecasting the future distribution of jobs in categories across the occupational spectrum by summarizing background data from the literature and presenting two alternative perspectives for consideration.

The study will be published in “Foresight: The journal of future studies, strategic thinking and policy.”

About TechCast Global:
TechCast Global is a research-based corporation that evolved from academic studies at George Washington University. The company’s expert team of consultants and collaborators includes hundreds of leading authorities with advanced degrees who work on the cutting edge of progressive fields. TechCast’s forecasting method is science-based, integrating empirical background data and expert knowledge into a powerful form of collective intelligence. The company’s Washington, D.C. headquarters is home to Federal agencies, the World Bank, IMF, NIH, NSF, the National Academies, major universities, and other NGOs with whom we work.