Kris Embrey explores gritty side of ’80s New York culture in , ‘Tell Me You Want Me’ 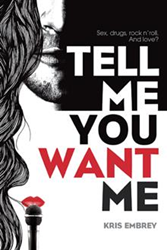 Nineteen-year-old Gina Kelly is used to working hard for everything in life. Despite her challenges, Gina has dreams to become an actor. When she sees an ad in Playbill for open auditions, she heads to New York where she surprisingly secures the lead role in a Broadway production. But little does she know that acting on Broadway is just the first step in what is about to become an adventurous new life.

Gina’s theatre director introduces her to the manager of one of rock’s biggest bands. He is desperate to find a backup singer before the band goes on tour and Gina is thrilled when he hires her. The chemistry between Gina and lead singer, Sebastian Roland, is instantaneous. Unfortunately, Sebastian is a married, pill-popping addict. As the group sets out on an adventure fueled by sex and drugs, Gina quickly falls in love with Sebastian. But when his drug use escalates, Gina is forced to make a decision with the power to change her future once again in “Tell Me You Want Me” (published by Archway Publishing).

“(The book) more or less deals with a rock star who grooms a young girl for his own pleasure,” says author Kris Embrey. “It’s scary to think that you could fall in love with someone who is so controlling, uses substances and become trapped in his world of stardom. I am not glamorizing drug usage at all by telling this story, I saw a lot in the New York club and music scene in the mid to late 80’s. and it inspired me to write this story. ”

More information is available at tellmeyouwantme.com.

About the Author
Kris Embrey has had a love of music since she can remember. She studied music engineering and worked for Dick Clark in his restaurant in Overland Park, Kan. Her professional career has included working for various television productions such as the American Music Awards and the Academy Awards. This is her first book. She can be reached on Twitter @kris_embrey.