The Black Keys announced last week that they will be embarking on a massive 2014 world tour. Tickets to the 42-date North American leg of their tour go on sale Friday, May 16th, and are available now at SuperStarTickets. 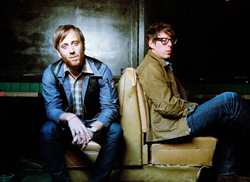 Rock duo, The Black Keys, have just announced a massive, world tour. This will mark the band's second headlining tour, which is in promotion of their recently released album Turn Blue. The North American leg of their tour will kick off in Columbus, OH on September 5th and will come to a close on December 21st in Kansas City, after making 42 stops across the United States and Canada. Joining them on the tour will be Cage the Elephant, Jake Bugg, and St. Vincent, all rotating as their opening acts.

7-time Grammy Award winners, The Black Keys, got their start in the early 2000s in their basements. It wasn't until their breakthrough album, Brothers, in 2010 that they rose to fame. Brothers was their sixth studio album which included the hit "Tighten Up." Since then, they've gone on to produce two more studio albums, El Camino and Turn Blue, the latter of which was just released this week. The band is known for other hits such as "Lonely Boy" and "Howlin' for You."

The Black Keys 2014 Turn Blue Tour tickets go on sale to the general public Friday, May 16th, at 10am. Tickets are expected to sell fast for this hot event; fans looking to secure their tickets now can find seats at a reduced rate of 10% off by using the code TURNBLUE at checkout at SuperStarTickets.com. Act fast, because this deal will only last for a limited time.

SuperStarTickets is the nation's premiere ticketing source for concerts, theatre and sporting events. We pride ourselves in not only our incredible tickets, but also in our commitment to our customers. With highly skilled representatives there to guide you along the way, we guarantee that your ticket buying experience will be easy and painless. For more information regarding The Black Keys 2014 Turn Blue Tour or to buy cheap concert tickets go to SuperStarTickets.com now.