AppsGeyser, the online Android app tool platform, has set the foundations for Android app success down in stone for all Android app makers. 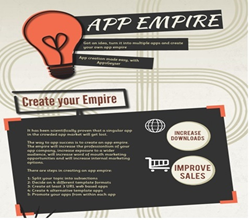 Since early 2011, AppsGeyser, the leading online app making platform, has allowed over half a million people to create android apps with their online tools. In the past year, there has been a significant change in the way AppsGeyser works, with more emphasis being put on Android app success.

AppsGeyser believes that it is important to take a step back from the physical app creation process before stepping into the world of app making. One of the first questions which needs to be answered will determine whether or not the app maker has what it takes to become an appreneur, and that is; patience, determination and a business plan.

In order to understand the secrets to Android app success, the app maker needs to be willing to spend time in the research and business planning process before embarking upon app creation. The more time spent here, the less time the appreneur will spend at work after their business is up and running. For more information on becoming an appreneur and following in the footsteps of some great entrepreneurs such as 4 hour work week author Tim Ferris and appreneur Chad Mureta click here.

AppsGeyser Android app maker Elaine Smith told us: "I have made apps using different app tools, spending money that I could not afford, I almost gave up on my app career until I came across AppsGeyser. Not only are the tools free and easy to use, but their blog is so informative. The blog posts have helped me understand how to turn my app into a business success."

AppsGeyser Co-founder Vasily Salomatov, explained, "It is not enough for our users to just make Android apps, we want our users to be able to help their businesses, and build new businesses through the creation of successful Android apps.”

AppsGeyser, launched in February 2011, is a fast growing Android app creation platform. AppsGeyser enables users to create apps for Android devices from any web content in under five minutes. AppsGeyser has seen more than 579,000 apps created on its platform. There have been more than 424 million downloads of its apps.