Portfolium.com Partners with University System of Georgia to Close Skills Gap Between Students and Employers

The nation's 5th largest university system has selected Portfolium's competency-based platform for matching students and alumni to jobs and internships on the basis of learning outcomes. The exclusive, system-wide agreement encompasses 29 campuses including 3 historically black colleges and universities. 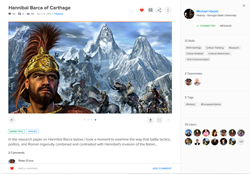 With access to previously hidden skills data, employers can make more and better matches between their jobs and qualified students.

Portfolium has partnered with the University System of Georgia (USG), the 5th largest university system in the United States, to help 318,027 students and millions of alumni at 29 campuses get hired by exposing hidden skills that can’t be gleaned from a resume.

Portfolium’s unique power lies in its ability to translate digital work samples (such as class assignments, presentations, and written reflections) into the language of employment; skills and competencies. With access to previously hidden skills data, employers can make more and better matches between their jobs and qualified students.

This exclusive system-wide agreement gives USG the option to adopt and expand usage of Portfolium’s holistic competency network - a uniquely open platform that powers development and assessment of competencies within the classroom, while also matching learners with employers externally.

"With 50,000 students and one of the largest populations of low-income students in the country, we have struggled to scale effective career preparation across our student body. Now, we're using Portfolium to help. We're employing analytics to link students to careers that match their individual abilities and Portfolium as a platform for students to document their career readiness at scale," said Dr. Timothy Renick - Vice Provost and VP for Enrollment Management and Student Success.

Portfolium partners with colleges & universities to help students connect learning with opportunity. Our ePortfolio network helps 5M+ students from over 180 partner institutions manage their skills and launch their careers. Portfolium’s cloud-based platform empowers students with lifelong opportunities to capture, curate, and convert skills into job offers, while giving learning institutions and employers the tools they need to assess competencies and recruit talent.