The 5 Most Affordable Retirement Havens of 2019—InternationalLiving.com 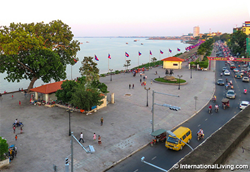 “Part of what makes a country a good bet for retirement is its affordability,” says Jennifer Stevens, International Living’s Executive Editor. “It’s that simple. So we assess the value baby boomers get for their dollars overseas and come up with a short list of the spots where greenbacks stretch the most—that's the countries around the world that top the Cost of Living category of our annual Global Retirement Index.

“In these low-cost communities, folks can live well on a modest budget, meaning they could afford indulgences like a housekeeper or regular meals out as well as enjoy the security net of affordable healthcare and accommodation.”

The five countries that score highest in the Cost of Living category of International Living’s 2019 Annual Global Retirement Index are….

For the fourth year in a row, Cambodia takes the top prize in the Cost of Living category of the Annual Global Retirement Index, scoring full marks: 100 out of 100.

When folks dream of visiting Cambodia they are initially more likely influenced by the exotic draw of its ancient temples, royal palaces and saffron-robed monks or the beautiful beaches and undeveloped islands on the southern coast than anything else.

But the low cost of living leaves them astonished. Cambodia is a place where retirees can upgrade their lifestyle to one of luxury on a modest budget.

“Living in Cambodia has been a game changer for me,” says Paul Howard, 68. “The lifestyle I can afford is amazing and I feel a real sense of financial freedom compared to my old life.”

Paul has lived in the capital, Phnom Penh, for two years, lured by the incredibly low costs he observed on a vacation to the country.

“The rent for my Western-style apartment is $275 a month, and even with utilities, air conditioning, and cable television, I only pay $380 for everything,” he says.

“You can’t imagine the difference in my life. Living in Cambodia means I never have to worry about what things cost, as it’s all so affordable. You name it, and I guarantee you can get it for a fraction of the price back home.”

These low costs let expats in Cambodia live richly on a poor man’s budget—a bottle of Champagne goes for $25 (as a former French colony, the European influence can still be felt in Cambodia) or a round of golf on a pro-designed course with caddie for $65 a day at the country club.

Southeast Asia is one of the world’s most popular tourist and retiree destinations. With its tropical climate, mouth-watering food, and bewildering range of shopping delights, the region melds together big-city buzz with the charm of small historic towns, and low-key beach life. The region’s rising star, Vietnam, takes second place for Cost of Living, just one point behind Cambodia, at 99.

“Our apartment is about 1,200 square feet, and it came fully furnished, even with a built-in oven, which is quite unusual for Vietnam,” Esther says. “The best thing is the view of the riverfront from the balcony and from our bedroom. We could live much less expensively, but the view made me feel like I had to have this apartment.

“Our rent is $800 per month, and it includes parking, as well as use of the pool and gym. It would be way more than we could afford in the States. In St. Louis, we’d be paying around $2,200 per month for a comparable apartment with a view of the Mississippi.”

Lured by the rich culture, first-class healthcare, and low cost of living, an increasing number of expats are calling Thailand home. The country—taking third place with 94 points—offers a wide range of great retirement options from vibrant towns and cities to laidback beach spots and highlands.

The country’s second-largest city, Chiang Mai, is well known as being one of the top places for retirees and digital nomads to settle—a place to upgrade their lifestyle.

“The chance to live an opulent, resort lifestyle is at your fingertips,” says Rachel Devlin, IL’s Chiang Mai correspondent. “You’ll find the top resorts offering gym memberships to local expats—they’re a bargain. For just over $500 a year, you can have a membership to the Rati Lanna Resort & Spa.

“Or you can play in the footsteps of royalty at the Gymkhana Golf Club. Established in 1898, this club has been visited by kings and queens, consuls, and even the novelist William Somerset Maugham. For under $5, a nine-hole game may be just what you need; and all within view of an ancient and famous Yang Na tree that has been ordained as holy.

“And Chiang Mai is now rivalling Bangkok for elite dining experiences. Just recently, the Shangri-La Hotel has been hiring Michelin-ranked chefs to offer divine culinary meals at very affordable prices. For example, nine dishes set over a seven-course lunch costs only $44 per person. For $17, you can add a glass of wine to each of the first five courses—specifically chosen to complement the dishes on offer.”

Peru and Bolivia are tied for fourth place with 92 points.

Machu Picchu is by far one of the most iconic landmarks in South America but there is much more to Peru than this ancient Inca citadel. Miles of unspoiled beaches, hundreds of other archeological sites, colorful colonial cities, and dense tropical jungles. And all of it is remarkably low cost.

Walter Rhein, 43, is originally from Wisconsin but has been living in Peru on and off for the past 17 years. He first moved to the capital city, Lima, in 2001, and lived there full-time for the next eight years. Now, he and his wife maintain residences in both the U.S. and Peru, and they spend a considerable amount of time in Peru each year.

“Renting a nice apartment in Miraflores [an upscale district of Lima] is going to start at $800 a month,” Walter says. “Once you get to $1,000, you’re starting to get ones with a nice ocean view. You could probably keep it to another $1,000 for food and entertainment. And then your healthcare is inexpensive. I could still live here for under $1,000 a month, if necessary.”

“My quick calculation is that I was spending $8,000 a year here in the old days, including two trips to the U.S. and one trip to Europe. And that was going out to eat four or five times a week.”

Nowadays, living in Lima costs more, but it’s still affordable. “You can have someone live with you and prepare your meals for under $500 a month,” Walter says.

“Pharmaceuticals is another big factor. I use an inhaler…my Ventolin inhaler in the U.S., with insurance, is $25. In Peru I can get the same inhaler for $6. There was another one for asthma, the Advair disk. That’s $250 a month in the U.S. Here, it is $50—buy two, get one free.

“And this applies to all medications…any medications you are taking, across the board, cost a fraction of what you would spend in the U.S. And that’s probably a large part of the cost that most people who are retiring are spending.”

From adventurous mountaineering routes, to the lush Amazon Basin, and the Uyuni Salt Flats, Bolivia attracts visitors in their droves each year. But, with warm, welcoming people and a low cost of living, more and more are calling the Andean nation home.

In 2015, at age 66, Terry Booher moved to Cochabamba in Bolivia’s central highlands. Part of Terry’s decision to move was because he needed somewhere dry and warm to help manage a long-term health condition he’s struggled with since serving in the Vietnam War: congestive heart failure (CHF).

Just a couple of weeks after arriving in the country, Terry had a medical scare, with fluid building up in his lung. He was rushed to the emergency room at one of Bolivia’s best hospitals, Los Olivos, in Cochabamba. He was treated and admitted to the hospital unit to manage his condition. “I could have chosen a shared room for a lower price, but I opted for the private room with WiFi, because it was so cheap,” Terry says. “To my surprise, the hospital was a brand-new building and had all the modern equipment you would see in the States.”

Terry ended up staying in that hospital room for eight days. In that time, he was seen by four physicians daily, he wore an oxygen mask around the clock, and three separate procedures were performed to drain fluid from his lung. Every morning he had several laboratory tests on his blood, along with a chest X-ray. He also had a pacemaker adjustment and an echocardiogram. The entire hospital stay amounted to just $2,800 for everything.

“I couldn’t believe the cost,” says Terry. “In the States, the ER trip alone would have been more than my entire week here. The doctors and nurses were all so nice, too, and took their time with me.”

Cochabamba is a popular choice among expats in looking for a slow lifestyle and access to creature comforts from home.

Eating out is an affordable pleasure, from the high end right down to street-food outlets. No matter which part of Cochabamba you’re in, you will find restaurants serving fried or rotisserie chicken piled high on top of rice and fries for about $1.50 to $2.

Not only is the healthcare and food more affordable, so is the real estate. Terry moved to a detached home that looks like a miniature White House and costs him only $500 a month in rent. That same home would cost $2,000 and up in almost any U.S. city.

Terry is delighted with his life in Bolivia. He says, “It was super to pull out of the fast-paced American lifestyle and move to a place so calm and peaceful.”

More details on the top five countries in the Cost of Living category of International Living’s Annual Global Retirement Index 2019 can be found here: The Cheapest Places in the World to Live in 2019