The Creatress, A New Comedy Film Starring Fran Drescher and Lindy Booth is Out Now

Young, bestselling author Eryn Bellow, played by Actress Lindy Booth, follows up her debut with a bestseller. In spite of the novel's mysterious message, it does not inhibit her pugnacious agent, played by Fran Drescher, to close a six-figure deal for film rights. Critical backlash soon threatens the reception of the novel as well as the work on her third novel. A zealous critic, portrayed by legendary director Peter Bogdanovich, goes so far as to publish a faux-memoir to mock her work, testing the limits of defamation. Instead of a lawsuit, Eryn decides to answer with a faux-memoir of her own to, quite literally, rewrite the course of her life. Through the noise, Eryn attempts to write her way out of the public fray, and reclaim her voice in the minds of her readers. Along the way, she hopes to prove a happy ending is not always a bad thing. 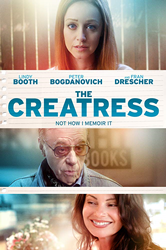 The Creatress is a recently released comedy film that stars the iconic Fran Drescher who is most well known for The Nanny, Happily Divorced, and Living with Fran. It also stars Hollywood legend Peter Bogdanovich; Actress Lindy Booth (The Librarians, Dawn of the Dead, Kick-Ass 2 and several Hallmark movies) and actress Kayla Ewell, who stars in The CW’s Roswell New Mexico and previously The Vampire Diaries.

The Creatress is directed by previous Days Of Our Lives actor Jason Cook, and produced by Café Oscuro Films, the production company of the Executive Producer Liliana Kligman and Jason Cook's Digital Cuvée.

The Film is available now on multiple platforms in +100 countries. You can watch it on iTunes, Google Play, Amazon Prime Video , X-Box Entertainment, YouTube on Demand, Fandango Now, Vudu, Vimeo on Demand, Redox On Demand ; and buy a physical release DVD/Bluray at: Amazon, Target, Barnes & Noble, Walmart and Best Buy.