Leslie Bricusse and Anthony Newley's tuneful global romp Stop the World — I Want to Get Off! pits worldly success versus personal happiness, and receives its first Cincinnati area production in over 40 years. 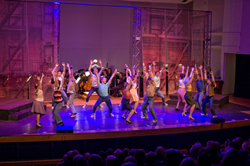 The KSO's 2008 semi-staged production of West Side Story.

"I recalled this quirky little show from the ‘60s that offered three big songs, a small cast and orchestra, with a title that seems more relevant today than it did in 1961,” — KSO Music Director James Cassidy.

The Kentucky Symphony Orchestra’s 2018-19 Passport to musical adventure continues to whisk audiences across the globe. On January 26 & 27, the KSO dusts off the 1961 musical Stop the World — I Want to Get Off by the British team of Anthony Newley and Leslie Bricusse, for the first Cincinnati area performances since 1978.

The KSO has produced a number of semi-staged, concert performances of Broadway musicals in Greaves Concert Hall — Kismet (1993), Jesus Christ Superstar (1997), Sweeney Todd (2002), Evita (2005) and West Side Story (2008). “While programming the orchestra’s 27th season, I was looking for a musical that was small and lesser known, and recalled this quirky little show from the ‘60s that offered three big songs, a small cast and orchestra, with a title that seems more relevant today than it did in 1961,” commented KSO music director James Cassidy.

Stop the World — I Want to Get Off is a thought-provoking musical pointing out the ephemeral nature of worldly success, often achieved to the detriment of one's personal happiness. Littlechap (played by Joshua Steele) finds himself a father before his time and agrees to marry Evie, the boss’s daughter (played by Brooke Steele). Though this helps him climb the business ladder, Littlechap (the everyman) finds himself trapped in the responsibility of a premature family. He turns to women of the world, yet finds only empty fulfillment. In the twilight of his years, he finally discovers that he has wasted his life looking for something that he actually had all the time — his wife's true love. Hit songs include: “Gonna Build a Mountain”, “Once in a Lifetime” and “What Kind of Fool Am I.”

As with West Side Story a decade ago, the KSO again partners with NKU’s School of the Arts as faculty
member and stage director Brian Robertson, along with the show’s seven-member chorus, all hail from the
University’s Theatre Department. The original 14-piece orchestration will be performed by members of the KSO under the musical direction of James Cassidy.

For 26 years the Kentucky Symphony Orchestra has taken the “phony” out of symphony by eliminating traditional barriers and presenting engaging, live, thematic concerts that enrich, educate and entertain the residents of Northern Kentucky and Greater Cincinnati. The KSO performs three series of concerts annually throughout Northern Kentucky.