A Visit Albuquerque partner and the only congressionally chartered museum in the nuclear field, the museum tells the story of the Atomic Age from early development to today’s peaceful uses 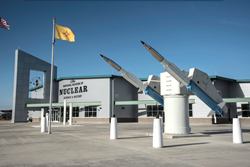 This is a year of many celebrations, and it has been a privilege directing such an important institution. We truly are a place to learn, think, imagine, and draw your own conclusions.

The National Museum of Nuclear Science & History, a nationally accredited Smithsonian Affiliate, celebrates its 50th year of service in 2019 as the nation’s resource for nuclear science and history. This museum is the only congressionally chartered museum in the nuclear field, and it tells the story of the Atomic Age, from early development, such as the Manhattan Project and Cold War, to today’s peaceful uses of nuclear technology.

The National Museum of Nuclear Science & History, originally known as the National Atomic Museum, was established in 1969 on Kirtland Air Force Base in Albuquerque, N.M., and was run by the Department of Energy with a mission focusing on the development of nuclear weapons. Over the years, the mission evolved into a greater focus of all aspects of nuclear technology, and the museum is now run as a 501(c)(3) nonprofit by the National Atomic Museum Foundation. The museum was forced to permanently relocate away from Kirtland on Sept. 11, 2001, due to heightened security measures, and it temporarily relocated to Albuquerque’s tourism destination of Old Town.

“We are now celebrating ten years in our permanent location at 601 Eubank Blvd SE, at the entrance to Sandia’s Science & Technology Park in Albuquerque,” said Jim Walther, Museum Director for the past 22 years. “This is a year of many celebrations, and it has been a privilege directing such an important institution. We truly are a place to learn, think, imagine, and draw your own conclusions.”

The museum presents, through its collections and its permanent and changing exhibits, the diverse applications of nuclear science from the past, present and future along with stories of the field’s pioneers. From exhibits focusing on Los Alamos during the Manhattan Project and the Trinity Site to the nine-acre outdoor exhibit area, there is something for everyone. Children engage in hands-on scientific learning in Little Albert’s lab, and visitors of all ages will journey back in time with the museum’s B-29 Superfortress, multiple fighter jets, nuclear submarine sail and a 100-foot steel tower – the only replica of the Trinity Tower that held the world’s first atomic bomb for testing in White Sands, N.M., in 1945.

To commemorate the 50th anniversary, the museum will be hosting many of its annual events with additional programming to focus on the celebration in 2019. The 50th Anniversary will be widely observed with the 22nd Annual Einstein Gala, taking place on Saturday, March 23. During this fundraising event, the National Award of Nuclear Science & History will be presented to Randall Stephenson, Chief Executive Officer and Chairman of AT&T Inc. AT&T Inc. was the first contractor to ever run Sandia National Laboratories, overseeing the labs from 1949 through 1993. This collaboration began with President Harry Truman asked AT&T to “render an exceptional service to the national interest.”

Additional events are scheduled through the summer and fall of 2019, and more information about the National Museum of Nuclear Science & History and its 50th anniversary can be found at http://www.nuclearmuseum.org. The museum is open daily from 9 a.m. to 5 p.m.

About the National Museum of Nuclear Science & History
The National Museum of Nuclear Science & History is located at 601 Eubank SE in Albuquerque, New Mexico. Formerly the National Atomic Museum, which opened in 1969 and was chartered by Congress in 1991, the Museum serves as a repository and steward of nuclear-related historical items and is a Smithsonian Affiliate. The Museum is open 9 a.m. to 5 p.m. 361 days a year. The Museum’s website is nuclearmuseum.org and the phone number is 505-245-2137.